World War II was a horrible time for this country and the world for that matter. However, the entertainment at the time was some of the best the world has ever known. Radio was the most popular medium and a great show heard by soldiers was "Command Performance".

Hosted by Harry “Bing” Crosby, who is congratulated for his win of the Academy Award. Bing sings, This Heart of Mine. Marilyn Maxwell flirts with Bing before she sings, Saturday Night is the Loneliest Night of the Week. 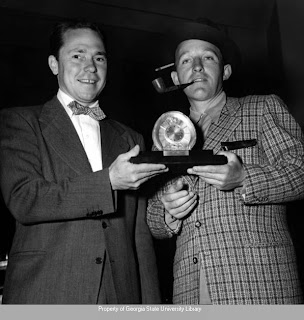 Singer and songwriter, Johnny Mercer joins Bing for some good natured teasing. Bing and Johnny sing Swing is Here to Stay. Or something like that. Mayor of Hollywood, Lionel Barrymore talks with Bing and shares pointers on dramatic acting. Bing sings with the Charioteers, Dear Old Girl.

Dame Whittier, an older star of the stage drops in to share admireing words for Bing. Bing sings a final tune, the Fifth Marines...

SOURCE
Posted by David Lobosco at 4:43 AM