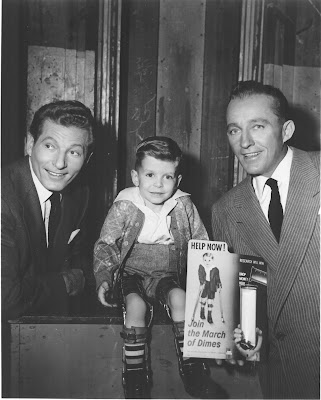 Danny Kaye, Bing Crosby, “White Christmas” and…March of Dimes?  The March of Dimes has been helping families by focusing on improving the health of babies and children for 75 years. We all aspire to provide the best care and comfort for our children.

Over half a century ago, when paralytic polio threatened our children, Danny Kaye and Bing Crosby projected a similar message to pitch for the March of Dimes. The photo above, with March of Dimes poster boy Delbert Dains, was taken on the stage set for the movie White Christmas, released in 1954. The song “White Christmas,” by Irving Berlin and which Crosby first popularized in 1942, remains the best-selling single of all time. That Bing Crosby was one of the three “ultra icons” of pop music (the others are Elvis Presley and the Beatles) is undoubtedly lost to most people today, but a person viewing this photo in 1954 might recognize a familiar set of associations typical of that era: a child disabled by contagious disease, the most popular singer of the age, and the nostalgic pull of the meaning of Christmas and the emotional security of home.

The March of Dimes message has evolved, just as our mission has evolved. Our fervent wish for “a fighting chance for every baby” is the bedrock from which all of our educational programs and scientific research are launched. From that perspective, and in the spirit of the season, we hope all the readers of News Moms Need will find that special place in the coming weeks “where tree tops glisten, and children listen.” As a sad postscript, Delbert Dains passed away in 1962... 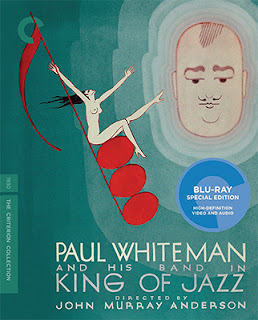 Even if all of them currently existed, at all or in ideal form, you likely wouldn’t have to sit through many of the early-talkie screen musical revues to realize that King of Jazz is the standout specimen from a discredited litter. And such faint praise, gotta say, prodigiously underrates the most bug-eyed time with a movie I’ve had in a while, thanks to what Criterion has done with this color/design landmark’s costly, long-gestating and almost full-length 4K restoration, which had already dazzled friends of mine in public showings. There was already enough interest in the film’s unearthing to inspire a 2016 coffee table book by James Layton and David Pierce (King of Jazz: Paul Whiteman’s Technicolor Revue), who also offer a history of this tangled Universal production in another of Criterion’s ultra-classy bonus sections (did someone also say Garry Giddins and Michael Feinstein just for starters? — Lordy).
I remember Whiteman well from my days as an inveterate boomer-kid TV watcher, but the truth is that he was semi-forgotten even then and his status as a jazz figure (much less jazz royalty) was very much in decline to anyone who was embracing all things Miles or Thelonious. He was still, however, a formidable physical presence, what with an offbeat mustache that would have disfigured even Clark Gable and physical heft directly out of the Oliver Hardy laboratory that had at one time (per Giddins) engendered major news stories whenever he attempted a diet. This made him as unlikely a bet for movie stardom as Kate Smith and Liberace later turned to be, and all the frittering around to find a format that could adequately present him on screen (there was a kind of revolving door of directorial possibilities for the movie as well) forced delays on production that indirectly resulted in the picture’s severe underperformance at the box office.
So rather than make him a romantic lead or a Cupid to younger lovers, this peer-respected orchestra leader — who had helped spur the first performance of Gershwin’s “Rhapsody in Blue” and included the young Bing Crosby with the Rhythm Boys as part of his lineup — ring-mastered a performance revue whose delights genuine and demented included a “Rhapsody” reprise; Bing’s very first screen appearance; the Russell Markett Dancers (who soon evolved into the Rockettes); and the first cartoon in Technicolor (by Walter Lantz) in a manner that might later have reminded people of a far more elaborate “Ed Sullivan Show” had the picture remained in circulation. To this was added the much celebrated stage director John Murray Anderson to film it (this should not have been his only movie); art/costume direction by Herman Rosse, who soon figured in some of Universal’s biggest horror staples of the early ’30s; and even a huge crane that had been previously purchased by the studio and must have made Busby Berkeley’s mouth water. 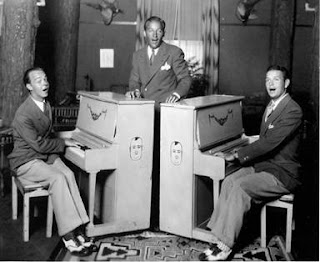 None of this is to suggest that every number here is a winner, but even Jazz’s not infrequent wincers (or would-be wincers were it not for the harmonious components that combine for the presentation) are more riveting than not to watch because I’ve never seen any two-color Technicolor movie look this great. Even an otherwise leaden bridal number early on washes pleasantly over the viewer thanks to its cornucopia of visual cosmetics. And then, for a capper, we see this veil — which looks long enough to cover half the width of a small U.S. state and expensive enough by itself to have covered the cost of Lash La Rue’s total screen oeuvre.
Seeing Crosby with semi-rouged cheeks is an unusual sight, though when he and the “Boys” break into snippets of “Mississippi Mud” and “Happy Beat,” it’s so enthralling that these pink-ish cheeks recede to another part of the brain. Jazz was Crosby’s only color movie until Paramount’s Dixie in 1943 and one of the very few Bings from his home studio that controlling Universal hasn’t released in this country (there is an official Region 2 DVD). This is almost surely due to that biopic’s minstrel-show angle — and even despite its inclusion of “Sunday, Monday and Always,” one of his biggest hits the era. So seeing Jazz with Crosby in color here is a real gift that whets my appetite (not that any whetting could ever be needed) for the long awaited Vol. 2 of Giddins’ definitive Crosby biography, due in November.
When one of Bing’s many 20s benders (he later brought personal experience to The Country Girl) led to a car crash and a dress-down the judge in court, the singer probably dodged a career bullet when his intended big “gaucho” number went to John Boles — whose appearances for me are always complicated by Anita O’Day’s assertion in her autobiography that Boles raped her in her dressing room (she later backtracks or softens this a little, but still …). This splashy set piece is inevitably risible but is (again) put over by the color schemes, lighting and, well, total design. So the payoff is that when we really do have something to write home about content-wise — as with otherwise non-existent footage of violinist Joe Venuti and guitarist Eddie Lang playing up a storm together, or the finale that sends everyone home with a bang — this is a not inapt movie to be seeing just as 2001 celebrates its 50th anniversary because these scenes, at least, have a comparably hypnotic effect.
Unfortunately, there weren’t nearly enough patrons to go home with a bang or otherwise, because the delayed production landed Jazz at the end of an early-talkie-musical cycle that had already snapped viewer tolerance. This is a tragedy because, for all of its sporadic creakiness, this one’s incomparably better than MGM’s Hollywood Revue of 1929 (which is nowhere near as entertaining as its oft-excerpted two-color “Singin’ in the Rain” number might suggest) or Warner’s Show of Shows, which is instructional only as a primer in understanding just what it was that Show emcee and Bob Hope influence Frank Fay “had” (apparently, not much, said his onetime abused wife Barbara Stanwyck). 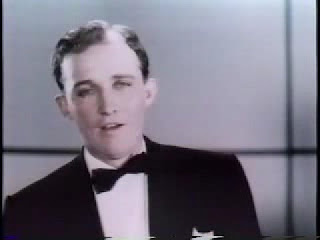 Jazz started to exist for modern-day audiences as something more than a rumor a few decades back, and Universal even released an official VHS in 1992 — a pre-restoration eyesore with inferior sound (I should have mentioned that the new Blu-ray is also easy on the ear) and a slightly shorter running time than the restoration print, which itself is missing relatively minor footage. And now for a story: A chuckling colleague of mine roaming the files during our AFI Theater days stumbled into a solid gold letter from MCA chief exec/CEO Lew Wasserman himself, whose chew-outs were legendary. Our then AFIT boss, possessed of certain genius but one for whom “right clearances” was not a middle name, had apparently run Jazz(this was before our time) when MCA-owned Universal had told him he couldn’t (God knows where he got the print). So here’s the Lew Wasserman letterhead across the top of a letter from possibly the most powerful person in Hollywood that begins: “Dear Mr. XXXX, I fail to understand … .” That’s an opening scarier than anything in a Universal horror movie from a guy that the late twinkle-eyed producer David Brown once speculated (in the 2005 documentary The Last Mogul) had had only one orgasm of his life reading the grosses on Jaws.
As for bonus goodies, we have Feinstein interviewed for a musical backgrounder; a couple germane Oswald the Lucky Rabbit cartoons; a Whiteman performance short subject; deleted scenes; a jam-packed essay by the knowledgeable and verbally magnetic Farran Smith Nehme, who’s one of my favorite film writers of the impressive many who are 125 years younger than I; and a voiceover commentary by Giddins, critic Gene Seymour and (hold on) musician/bandleader Vince Giordano — each of whom can fill in the others’ infrequent blanks. This trio is full of all kinds of nuggets, including anecdotes about how blisteringly hot the Technicolor lights were when the entire Whiteman band had to play inside a way oversized piano — one out of the last reel of two from The Incredible Shrinking Man — in tuxes. And how big were the piano keys? About a foot long.
King of Jazz isn’t anywhere near perfect, but it is perfectly amazing, and so, again, is one of those discs that justify the invention of Blu-rays (don’t even think of talking to me of streaming, OK?). Along the way, Whiteman gets a little renewed overdue due. He didn’t really play jazz as we know it, but it wasn’t like what had come before amid a period of real pop-cultural flux. Next to the bridal number here, he really was out of a new century. 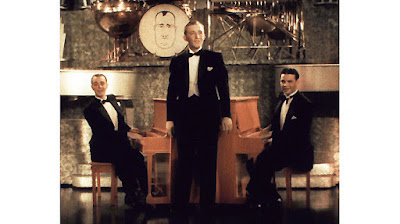