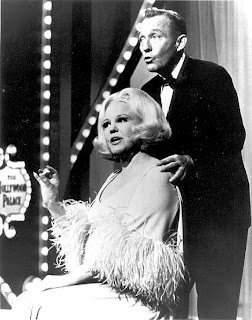 Bing had a definite admiration for songbird Peggy Lee, and the feeling was mutual. I wish they would have worked together more, but Bing is mentioned quite extensively in Peggy's Autobiography,"Miss Peggy Lee~An Autobiography", published in 1991.


On page 125 she writes~"By now my work with Bing and Durante was going full force, and my love for them both brightened my life. Years earlier I had literally saved pennies to go see Bing's movies. Tears rolled down my cheeks if the leading lady didn't treat him right. In the film "Mississippi" I was emotionally spent when the brokenhearted Bing sang "Down By The River"

Through the several years I sang on Bing's program,I met the most fantastic stars, like Al Jolson, whom I also sang with, and Bing was always finding ways to help give me confidence. In fact, everyone connected with him was funny and nice and talented.

Bing and I were always the first to arrive for rehearsals~that was something that always impressed me, his promptness. And I always felt you could count on his honesty. Bing maintained a certain modesty, even diffidence, about himself, although he didn't wear it on his sleeve. I remember his saying, "I wish I could really make something of my life...". That amazed me, that he could feel so humble. I tried, in a stumbling sort of way, to tell him what the world thought of him, but I don't think I ever convinced him.

...one evening in San Francisco, Bing asked me to go to dinner with him..

For dinner he took me to one of San Francisco's great restaurants, during which I told him about my emotional experience with his movies, especially "Mississippi" when he sang "Down By The River". We then cruised all over that wonderful city until we found a pianist who could play the song in Bing's key, and he actually sang it to me at our table. Once again, all those years later, the tears rolled. A whole river of them....

Bing was also so protective of me. Once he found me standing rigid outside the studio at NBC and asked what he could do to help me. He was so sensitive to my early days of nerves and self-consciousness. This was just before air time on one of Bing's many Kraft programs. I managed to say something like: "When you introduce me, would you please not leave me out there on the stage alone? Would you stand where I can see your feet?" He agreed and always sort of casually leaned on a speaker or piano to give me the support and time I needed to learn about being at ease onstage.

You have to love a man like that. He offered everything-money, cars, his own blood, and even volunteered to personally babysit with our little daughter, Nicki, while David was so sick in the hospital.

The last time I saw Bing, we were both doing a benefit performance. It was beautiful, if brief. He called to me, "Hello, baby! So good to see you."

I was grateful I got to see him one more time. 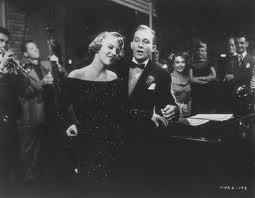 SOURCE
Posted by David Lobosco at 4:47 AM