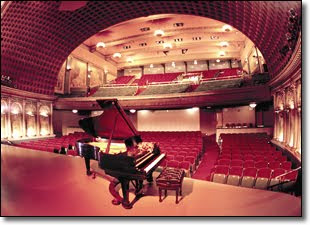 Dicker said Thursday he will invest in major renovations and upgrades to the building. “We are doing that in part to have more events in the Bing,” he said.

“In the future, I believe this building could become a major tourist draw for Spokane,” Dicker said in a news release.

Built in 1915, the theater at Lincoln Street and Sprague Avenue was originally called the Clemmer. It later became the State, and then the Met, before Silver changed the name again in 2006. The name recalls Bing Crosby’s early history, as he performed in the Clemmer in the 1920s before moving to California.

Dicker will retain the name and develop the theater into a showcase of Crosby memorabilia. Over the past few years he has helped acquire several thousand photos of the singer.

Dicker also said he’s gratified to be able to keep Michael Smith, the theater manager for the past 25 years, in that job.

The building is on the National Register of Historic Places.

SOURCE
Posted by David Lobosco at 11:54 AM