BING AND A VINYL REVIVAL 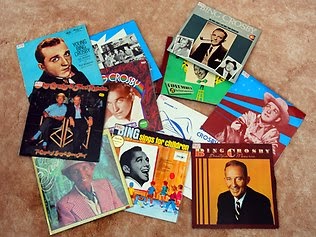 VIDEO may have killed the radio star but it seems CDs and iPods have not permanently dulled the love affair music buffs have with vinyl records. Vinyl is staging a comeback in the US, Europe and Australia and the nation's only vinyl record manufacturer is in a spin as modern artists elect to produce LPs as well as CDs.

The owners of Tasmanian music stores are also seeing a resurgence driven by collectors and audiophiles who rave about the superior sound, indie and punk bands who like the retro feel, and DJs who want vinyl records for their shows.

Records were thought to be close to obsolete a generation ago as CDs and internet downloads took hold.

Mr Cooper has about 460 Bing Crosby records and another 180 LPs.

He has built a cupboard to store his prized collection.

"I started collecting when I was about 14 years old and my old 78-speed records are as good today as the day they came out of the shop," Mr Cooper said.

He said he had noticed the recent interest in vinyl.

Andrew Argent from Red Hot Music in Devonport said the resurgence was being driven by younger customers.

New vinyl records arrive every week at the store.

Five years ago, there were none in stock.

"It is still a niche market but it has really taken off in the past two to three years," Mr Argent said.

"Records are more costly than CDs and while the younger ones are happy to pay the price, older shoppers tend to buy second-hand records from markets and garage sales." Mr Argent said the appeal of vinyl stemmed from a combination of factors.

"Vinyl is seen as cool and while some records are bought to never be played, most of the young buyers are giving them a spin," he said.

The records were stamped on a Beatles-era EMI 1400 machine and are among an estimated 500,000 pressings expected to emerge from the company's Marrickville factory this year.

Posted by David Lobosco at 7:24 AM