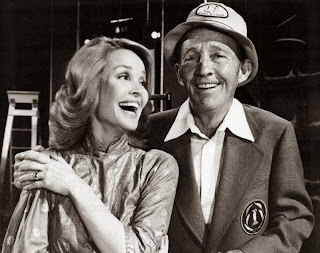 When a young Kathryn Grant married older crooner Bing Crosby, many people thought it would not last. However, they remained married for twenty years until Bing's death. Bing has been dead over 35 years now, and Kathryn remains one of Bing's supporters. On this day, November 25, Kathryn Crosby turns 80 years old.

Born Olive Kathryn Grandstaff in Houston, Texas, she graduated from the University of Texas at Austin with a Bachelor of Fine Arts in 1955. Two years later she became Bing Crosby's second wife, being more than thirty years his junior. The couple had three children, Harry, Mary Frances, and Nathaniel. She appeared as a guest star on her husband's 1964–1965 ABC sitcom The Bing Crosby Show. She largely retired after their marriage, but did have a featured role in the courtroom drama Anatomy of a Murder (1959).

She also played the part of "Mama Bear" alongside her husband and children in Goldilocks and starred with Jack Lemmon in Operation Mad Ball (1957).In the mid-1970s, she hosted The Kathryn Crosby Show, a 30-minute local talk-show on KPIX-TV in San Francisco. Husband Bing appeared as a guest occasionally. Since Bing Crosby's death in 1977, she has taken on a few smaller roles and the lead in the short-lived 1996 Broadway musical State Fair.

For 16 years ending in 2001, Crosby hosted the Crosby National Golf Tournament at Bermuda Run Country Club in Bermuda Run, North Carolina. A nearby bridge carrying U.S. Route 158 over the Yadkin River is named for Kathryn Crosby. On November 4, 2010, Crosby was seriously injured in an automobile accident in the Sierra Nevada that killed her 85-year-old second husband, Maurice William Sullivan, whom she married in 2000. Luckily Kathryn recovered...