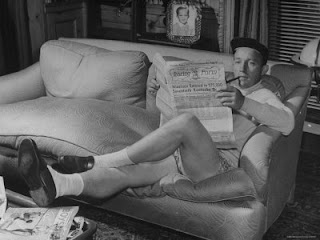 Three properties once owned by Bing Crosby are up for sale. Der Bingle sang of a "White Christmas," but the crooner's heart was in sunny Southern California, where he invested in real estate and built houses.

One that recently came on the market in Rancho Mirage is priced at $3,495,000. The sprawling 6,700-square-foot home sits on more than an acre with a hillside backdrop in the Thunderbird Heights neighborhood. The décor incorporates midcentury film posters — the Moroccan studio screening room is an ode to Crosby's "Road to" movies — and other Hollywood memorabilia and photographs.

The current owner is entrepreneur Jeff Teller. About seven years ago, a real estate agent asked Teller and his father if they had any interest in touring the former Crosby spread. "My dad, who is 72, remembered living near them in L.A. and thought it would be fun to see," said Teller, who was considering building a family home in La Quinta but was concerned about how long it might take to get a contractor. He and his father were awestruck from the minute they walked through the 10-foot front doors. The back of the house consisted of sliding glass doors that opened to views of the Coachella Valley, he said. "He looked at me, and I looked at him," Teller recalled, and they arrived at the same decision: "Let's buy this."

The single-story house, built in 1957, has an outdoor swimming pool and spa with adjacent fireplaces and a putting green. Crosby often entertained celebrities around the pool. Five bedrooms and 51/2 bathrooms include a wing named the Kennedy Suite in honor of President Kennedy's 1962 visit to Palm Springs. The suite has a kitchen, living area and separate entrance. On the other side of the house is the master bedroom wing, which Teller favors. "It has an outdoor shower with these quartz walls that Bing had brought in," he said. The estate has been used from time to time as a resort rental at rates of $2,000 to $3,000 a night, depending on the season. "We loved spending the holidays out there," said Teller, who has listed the property with Valery Neuman of Windermere Real Estate. "We could sit in the pool and see the snow on the mountains." A Toluca Lake home owned by Crosby that was listed at $10 million last year has been reduced to $5,995,000. Although the Southern Colonial has had a succession of Hollywood owners, including actors Andy Griffith and Jerry Van Dyke, it is still identified as Crosby's house.

SOURCE
Posted by David Lobosco at 6:25 AM