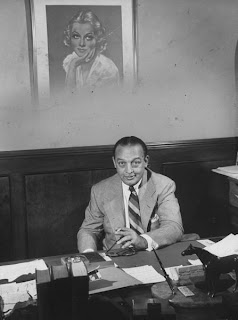 I was surfing the internet looking for interesting stories and tidbits, and I discovered that Bing's brother Everett Crosby (1896-1966) was married to an actress. Her name was Florence George, and she appeared in a few movies, namely COLLEGE SWING.

I have not been able to find out how long Everett was married to her or if they had any children together, but if anyone has more details, inquiring minds would like to know. Florence died on September 13, 1998 at the age of 80.

UPDATE: Malcolm MacFarlane of the International Club Crosby had this bit of info: Florence was Everett's second wife. They married on May 9, 1939. She was 23 and Everett was 42. This was what Carolyn Schneider wrote about her uncle Everett in BING magazine #144:"Uncle Ev was devoted to Florence, his second wife. So much so, that in an effort to boost her operatic career goals, he arranged a European singing tour for her. Uncle Larry was appalled to learn that the gowns Ev told his wife to buy for the trip cost more than what Florence was being paid for her appearances. Definitely not one of Ev’s money making deals, no one had the courage to tell Bing. And it was a good thing too that uncle Bing wasn’t around the day Florence came in the Crosby offices and brought her pet monkey. She parked him right next to poor Magee who was trying to juggle a multitude of phone calls and had no time for monkeyshines."

Florence never did make it big in entertainment, and the latest work I could see she did was appearing with Paul Whiteman on his 1950 revue show...
Posted by David Lobosco at 8:57 AM