Les Paul had one of the most colorful and diverse careers in the history of the entertainment industry. During his 80 years on stage and screen and in the studio, Paul was a solo performer, jazz bandleader, big band guitar chair, virtuoso sideman, pop tunesmith, radio personality, TV star, engineer producer, six-string eminence and inventor. In the latter role, the solid body guitar model that bears his name, multi-track recording and the harmonica holder are among his best-known creations. But Paul, who was born Lester Polfuss on June 9, 1915, was also a master of evolution as a guitarist. Many players start in one style and stay there for their entire career. Paul’s arc of technique runs from kid-with-a-cowboy-guitar to country picker to jazzman to pop player to textural genius and, ultimately, a distillation of all of the above.

Paul moved to California in 1943 to take his career up a notch. He soon formed another trio and succeeded in getting his group hired as staff musicians for NBC. Paul determined to begin recording with Bing Crosby, who was a gigantic star at the time and had a weekly show on the network, but was thwarted by the draft. In a turn of good fortune, and with a little string pulling by NBC music director Meredith Wilson, Paul was pressed into the Armed Forces Radio Service. There, he honed his studio chops, editing recorded variety shows for distribution to the military. He also recorded for the network and formed yet another trio as he developed his skills in recording and other aspects of the engineer’s art.

Thanks to a medical discharge, Paul was in command of his own time again by June 1944, when Nat Cole invited him to play the historic Jazz At the Philharmonic concert in Los Angeles. There, he played with Cosby and was invited by the star to appear regularly on Crosby’s radio show. Paul and his trio backed Cosby in the studio as well, playing on the number one hit “It’s Been a Long, Long Time” and other charters. Crosby was among those who encouraged Paul to build his own studio in his garage, where Paul invented the concept of home recording well before the D.I. Y. revolution.

Paul’s work as a sideman from this era is nothing short of stellar. His chordal work, decorated with melodic fills, perfectly supports the vocal performances of Cosby and the Andrews Sisters. He and Cosby, two great improvisers, had an especial supple musical relationship that made for great chemistry.

Paul’s visibility on the Los Angeles scene led to many TV and radio appearances for the Les Paul Trio, and after the group supported the Andrews Sisters in the studio they were invited to tour as the Sisters’ opening act.

While Paul’s group were exceptional, he noted that the Andrews Sisters’ pop music killed audiences at a level his jazz couldn’t attain. Thus motivated, Paul aspired to make his music more accessible to the average listener. He moved from jazz to a less sophisticated, melodically direct manner of playing. And he worked on overdubbing guitar tracks in his studio to create a sweet, unique sound that would be his alone. In took 500 tries until he recorded a version of “Lover” (with eight guitar tracks) that was to his liking in 1947. The song was a smash, affirming Paul’s plan for ascendance. 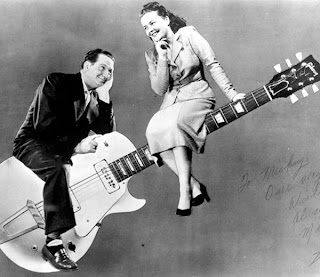 In 1951 and ’52, Les Paul and Mary Ford had more Top 10 hits than Bing Crosby, Frank Sinatra and the Andrews Sisters collectively, and tied with Patti Page as the nation’s top selling artists. But even as they rode their success to the pinnacle of American entertainment, rock ‘n’ roll was being born in New Orleans and Memphis, and by 1957, their run as chart-ruling hit-makers would cease.

As their record sales and concert draw shrank, Paul moved more into technology. He developed the eight-track tape machine in cooperation with the Ampex corporation and developed a controller mounted on his guitar that allowed him to blend in and control pre-taped guitar tracks during his live performances. He called the mechanism his “Les Paulverizer” and it was subject of several of his and Mary’s TV shows.

Paul remained a sonic experimenter for the rest of his life. He developed low-impedance pickups and a host of other devices and was working on digitizing the sound of his old television and radio performances at the time of his death on August 12, 2009... 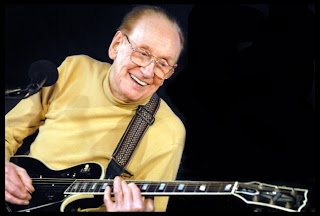