BOB HOPE: BACK ON THE ROAD 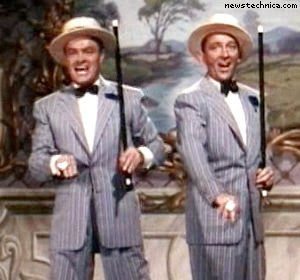 Bob Hope is going on the road again. Well, at least a lot of Hope's golf memorabilia is hitting the road.

An exhibit called “Bob Hope: Shanks for the Memories” has been drawing huge crowds to the World Golf Hall of Fame in St. Augustine, Fla., for the last 2 years. Considering the exhibit was only planned to run for a year, it's fair to say it has been the most successful exhibit at the Hall.
Now the Hall of Fame, along with the Bob and Dolores Hope Foundation, is converting “Shanks for the Memories” into a 2,500-square-foot traveling exhibit that will criss-cross the country in the coming years.

“His story is so compelling that we felt it was the ideal candidate to build into our first traveling exhibition. We are honored to have the support of the Bob and Dolores Hope Foundation in this exciting venture.”

The exhibit will debut Oct. 1 in Green Bay, Wis., before moving on to the Gerald R. Ford Presidential Museum in Grand Rapids, Mich., for a Feb. 8-June 10 run. Those are the only two locations booked for now, but it is estimated “Shanks for the Memories” will visit about 14 to 16 cities before the tour is done. You have to assume the exhibit will make it to Los Angeles at least, if not the desert. 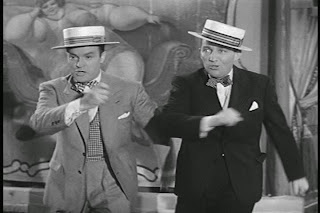 There is a desert connection to the exhibit beyond just Hope's involvement with the Coachella Valley and the local golf tournament. At the 2008 Bob Hope Classic, officials of the World Golf Hall of Fame and Hope's daughter, Linda, announced plans for the exhibit, which was to debut in November of that year for a one-year run. Previous exhibits at the Hall of Fame had honored Ben Hogan, Jack Nicklaus and Arnold Palmer.

At the announcement of the exhibit, Linda Hope said her father would have chuckled at having an exhibit in a golf Hall of Fame.

“This is something I know would bring a great smile to his face, to know that his treasured items are going to be with the golf Hall of Fame,” Linda Hope said at the announcement.

But Hope one-upped all of the other big-name golfers. Hope's exhibit was so popular that it was extended for a second year.

The exhibit is described as a series of themed modules, each honoring a different part of Hope's remarkable career, such as his contributions to comedy, achievements in entertainment, his relationship with presidents and of course his passion for golf. 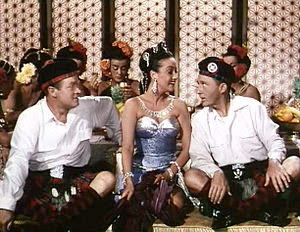 There may be no Bing Crosby or Dorothy Lamour on this particular trip to the road for Hope, but golf fans should enjoy this trip as much as Hope's cinematic trip to Morocco. And they can only hope this road winds through the desert.

SOURCE
Posted by David Lobosco at 5:22 AM