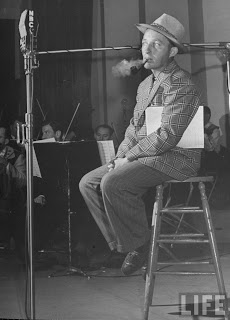 A fellow Bing Crosby fan and collector, is working on cataloging all of Bing Crosby's appearances on the Kraft Music Hall, but he needs your help. He has some gaps in his work, and if anyone can help him it would be greatly appreciated:

"I'm working on a project to catalogue all of Bing's surviving Kraft Music Hall performances ... not just the shows but individual songs.

So far many different versions of songs have been identified (did you know that the three versions of KKK-Katy have survived?). In addition several unknown rehearsal recordings have been revealed such as Play Fiddle Play from 5 June 1941.

With respect to the half hour shows which were broadcast between 1943-46 most have survived, if not as a complete Kraft show then as an edited AFRS program. Unfortunately I haven't been able to track down all the shows yet. 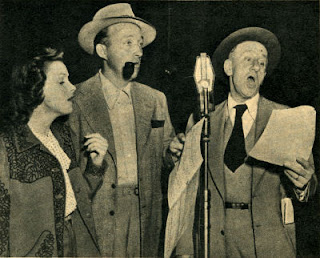 I have, however, been able to locate all but 33 songs which were recorded on Kraft between 1943 and 46. Interestingly, several recordings from the rehearsals for the Kraft shows have also survived.

Regarding the shows in the full hour format recorded between 1935 and 1942, far less have survived.

While there are many hundreds of songs that I have not been able to locate, many which are unknown to me must exist in various collections around the world. It would be nice to think that one day that they will see the light of day. While this may seem like wishful thinking only 2 days ago I came across 2 songs from 1939 which were previously unknown to me ... a barbershop version of In the Evening by the Moonlight with banjo backing and a brilliant version of Silent Night. So I'm still hopeful that more will come to light."

Again, this is a very worthwhile project. If anyone has knowledge of the Kraft Music Hall performances with Bing and can help, please drop me a line and I will put you in touch with this project organizer...
Posted by David Lobosco at 4:36 AM