BING AND ANOTHER FAN EXPERIENCE 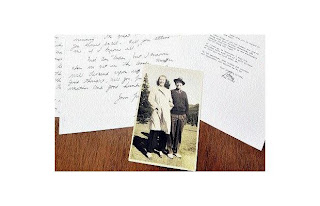 Bing Crosby's letters remarkable tie to famed singer's Jasper visit By The Vancouver Sun August 22, 2009 Be the first to post a comment

Eighty-one-year-old Rose Baylis has a collection of handwritten letters she received from Bing Crosby after meeting him as an 18-year-old in 1946:

I don't cherish these letters, but I do treasure the memories attached to them.

It was 1946 and the Jasper Park Lodge had opened up after the war. They wanted university students to man the lodge as cabin girls.

Paramount Pictures was making a movie called The Emperor Waltz starring Bing Crosby in Jasper before the paying customers were to arrive.

I was assigned to Bing's cabin on Lake Beauvert. One day I was called to his cabin because his pyjamas were missing.

Bing was sitting on the stairs whistling away and I said, "I don't have your pyjamas Mr. Crosby." I went right inside to the bedroom and I found them hanging on a hook in the back.

Bing started talking to me and told me to sit down. Then he started to sing every song he could think of that had the word rose in it. I was a green Saskatchewan girl and I loved meeting Bing and having him sing to me, but by gosh he was an old man as far as I was concerned. I said that I had to get back to work and he asked me if I would go golfing with him sometime and I said I don't golf, so we went for walks instead.

He left shortly after and then the first letter came. He sent it to Jasper with a Canadian stamp mailed from the Davenport Hotel in Spokane, Wash. It just said, "Sorry we left too soon for goodbyes, etc." Then he sent a picture of me taken by the movie crew and I sent him a thank-you for the picture and I mailed it to Hollywood. The letters kept coming and I'd write back to him. I thought why not, as long as he is writing to me.

A year later he wrote to say he was back in Jasper for the Totem golf tournament, which he won. Then he asked me if I would meet him for a drink at the Davenport Hotel sometime. He said to leave a message with the manager of the Jasper Hotel if I could make it. I had to say no because my sister was getting married.

When I was nursing at St. Paul's he used to send Christmas letters. Then one day the letters stopped coming and I didn't even miss them. I was busy with my own life.

But these are wonderful letters, beautifully written. The originals are in the Bing Crosby Museum at Gonzaga University in Spokane. I've always thought if these letters were in the museum, other people could enjoy them.

SOURCE
Posted by David Lobosco at 5:27 AM