Blog reader and the mastermind behind the Crosby Fan World forum, Jarbie, has brought up some interesting points about a forgotten Bing album called "Holiday In Europe". His points about the album are quite interesting... 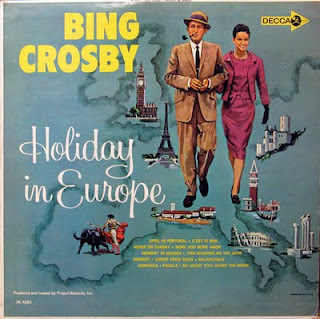 Just been listening to the tracks from 'Holiday In Europe' and pondering again on the claims made about the accompaniment. Just as a reminder, some of the tracks were first recorded in London on 16 October 1960. For some reason Bing's attention does not seem to be too focused on the proceedings. There were three takes - or possibly only rehearsals - of 'C'est Ci Bon', 'Under Paris Skies' and 'Morgen' and four of 'Melancolie' with the Malcolm Lockyer Orchestra. At several points Bing makes supportive comments - he says he likes the arrangement of 'C'est Ci Bon' and later of 'Under Paris Skies' but the whole affair is very informal and there are a number of false starts and 'fluffs'. 'Under Paris Skies' seems to be wholly a series of rehearsal run-throughs. In 'Morgen' Bing complains about getting lost and in 'Melancolie' he is getting impatient with himself and admits he does not know the song. By take 2 it is 'everybody duck - start again - I blew it' . On take 3 the language gets blunter still but Bing then says he hopes that there were no ladies present!

After all that effort nothing was finalised and on the available aural evidence it seems that no real effort was made to go back to attempt a final single good performance of any of the tracks. Fred Reynolds suggests that Bing wanted to off to keep a golf appointment.

That Bing and Orchestra were present together is abundantly evident. It is certainly not the case that Bing was singing over pre - recorded tracks. A large quantity of the material that was recorded 'escaped' from the recording studio and was the subject of informal release on both LP and CD, which have had a fair amount of circulation.

On 8th and 9th May 1961 back in Los Angeles Bing had another try, recording the four tracks that had been attempted in London plus the remaining eight - a total of twelve tracks, in two days. It has been said that these were dubbed over the orchestral recordings made in London. Clearly these could not have been the original recordings - Bing's own voice would be evident and there is little evidence of any successful orchestral takes from the sessions at which Bing was present. On the evidence of the material that 'escaped' I doubt anything sensible could be made of them. I am inclined to strong disbelief. What might have been possible is that the orchestra recorded some 'good' tracks separately at some later time without the presence of Bing. Maybe they just stayed on after Bing left for his golf. And of course there were another eight tracks not apparently attempted with Bing. On this scenario it might be possible that the whole session was intended to be a run through to see how things went and to establish a base from which Malcolm Lockyer could work for tracks that were intended for Bing to record over. There are a couple of instances for example where Bing suggests changes.

But an alternative scenario was also once suggested - that new orchestral tracks were recorded 'anonymously' in L.A. to which Bing added his voice. I'm uncertain whether anyone has come up with a definite statement (or conclusive theory) of what happened, but whatever the truth of the matter, the album overrall is quite satisfying and I do not detect any evidence of any tension in the timing and cohesion between the voice and the orchestra such as very occasionally occurs in other instances where Bing recorded over pre-recorded orchestral tracks. 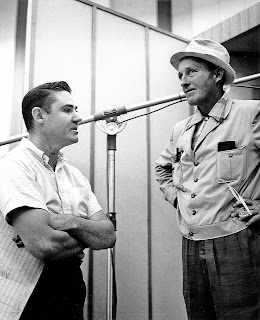 Bing made an interesting comment during an interview in the mid '70s to the effect that orchestral musicianship in London had come on a lot in recent years. One can only wonder compared to what? What had he in mind particularly?

Malcolm Lockyer was a well known British composer, arranger and light orchestra leader through the 1950s to the 1970s, dying in 1976 at the age of 53. He led one of the BBC orchestras in many broadcasts, and appeared in a longish series of Glenn Miller tribute concerts, whilst never achieving quite the level of recognition of one or two others such as Mantovani. He recorded frequently but mainly orchestrally and I have found it hard to find many examples of him with vocalists on record though he supported many vocalists on broadcasts.

I've always liked 'April In Portugal', C'Est Ci Bon', Pigalle' and 'Under Paris Skies', and they all have good entertainment value. I would not go so far as Will Friedwald who says that it is 'one of the all-time Crosby classics'. I'd put it at least half a rung on the ladder below that! I do go along with him however when he says, after noting that some of the titles were almost cliches by 1961, that 'Crosby makes them breathe anew, a sound so fresh that it's like we've never heard them before'. But surely Bing did that anyway? - he brought his own interpretation even to hackneyed material.

At the other extreme we have Ken Barnes who was dismissive, but at least he did not pick it out for adverse mention.- 'The only two abums of the early 60s that deserve a mention are 'Bing and Satchmo' and 'That Travelin' Two Beat'. Some others he does mention but only in order to pour scorn - notably 'El Senor Bing, and the 'Sing - Along' albums. Ken, I know you have very high standards but if you ever read this, I do not think that you should have dismissed 'Holiday In Europe' in this way. It deserves a positive mention! 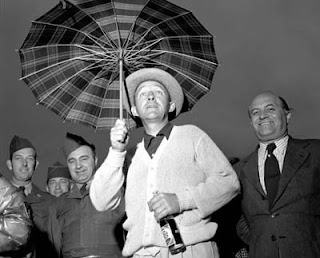 I'm amazed to see that my CD was issued as long ago as 1993 and does not seem to be available any longer. I must have had it for most of the intervening period, but it doesn't seem so long ago that I bought it. Aging Baker. It was issued by MCA Victor Japan using the Decca imprint. (MCA and Victor together is a bit of an oddity but international joint shareholdings and cross-border contractual rights have produced some odd ties). Like all other Japanese issues that I have or have seen, both CD and LP, it is very well produced and they always include a full set of lyrics in English within the sleeve notes. The oddity is that there are other apparently comprehensive notes but only in Japanese, so it is clearly intended for the Japanese home market. Wonder what is said? Tantalising...


SOURCE
Posted by David Lobosco at 5:32 AM