Zombies are very popular now on television and movies, and I found this story about if Bing was a zombie. It is bizarre and not for everyone, but it is about Bing... 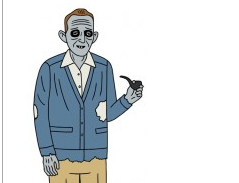 Warning: Some “colorful” language within, might not be good for little ones. -Matt

Christmas Eve. A time of peace and caroling. Stockings are hung by the fire in hopes that the patriarchal paradigm will reward us for our submissive behavior. Soon St. Nick will appear. Unless you die first, of course. Police in the metro area are getting reports of a sloppily dressed crooner with a pipe singing for people and then eating them.

And I opened the door. Bing Crosby was standing there in the flesh. Well, as much flesh of him that hadn’t fallen off. He started singing. Normally I would have shut the door but who can resist Bing Crosby singing White Christmas on Christmas Eve? So I invited him in.

After being invited in, Crosby, or his zombie equivalent, sat by the fire place and regaled the family with Christmas tunes and stories of Hollywood in its glory days. I remember during the making of Road to Singapore Bob Hope and I had a bet on who would be the first to sleep with Dorothy Lamour. I thought I would win. What woman can resist a crooner.

. It was this off-color anecdote that convinced the family to throw Crosby out.

It was then that he got belligerent. He grabbed my wife and started eating her arm. At first I thought it was just some crazy Hollywood joke but then my wife started screaming. I got scared and hit Crosby with a shovel and threw him out. Now my wife’s a zombie! But on the bright side if she’s dead I don’t have to pay her alimony I guess.

After being thrown out Crosby went from house to house, knocking on doors and asking the residents if they had seen Bob Hope. When told that Hope had not been spotted Crosby would take a bite out of whomever answered the door.

It was after the eighth house had been attacked that police mobilized.

“We’ve been expecting the zombie apocalypse for years” said a police lieutenant.

Despite their ammunition the police were not able to stop zombie Bing.

I guess we didn’t think it through too clearly. I mean he’s already dead. What good would shooting him do? I know, you’re supposed to shoot zombies in the head. But we are police officers. We’re notoriously bad shots, except against private citizens defending the second amendment.

With all other options gone, police decided to pay a call on David Bowie.

He was reluctant at first to help us. ”Please don’t make me sing Little Drummer Boy again” he kept begging. But eventually we wore him down. We told him it was his patriotic duty to help us. He agreed. Though it might have been our crisp blue uniforms.

After being flown into the kill zone, Bowie was dropped off and told to distract Crosby. He was unsuccessful as zombie Crosby attacked Bowie, throwing him onto his stomach and biting his neck and back. Bowie could be heard screaming, “Stop! I gave up this sexual practice in the 1980s!”

With Bowie now turned into a zombie, he and Crosby cut a wide swath across the United States, eating anyone unlucky enough to cross their paths.

President Obama is scheduled to address the nation about the Crosby/Bowie zombie menace.

Those who have seen a rough draft of the president’s speech say that it asks all Americans to remain calm and to remember the many contributions zombies have made to world culture.

“Let us welcome zombies into our homes. Now is not the time to appear triumphalist about being non-dead.”

***Breaking News***
Zombie Bob Hope has joined forces with Crosby and Bowie and they threaten to eat every last living person. And then make a Road movie.

Posted by David Lobosco at 5:44 AM