I am happy that another volume in Sepia Records ongoing series of Bing Crosby issues will be happening. This release is particularly mouth watering for Bing fans! The title will be released on March 4, 2016... 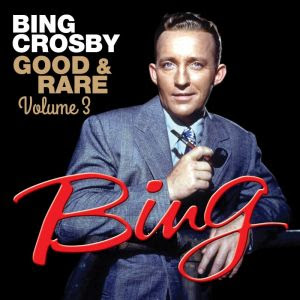 Bing Crosby fans will be delighted with this 'Good & Rare Volume 3' CD containing a plethora of previously unissued recordings, alternate takes and rehearsal recordings. All good and all rare!

Starting with "Ol' Man River" from 1928, highlights include this unissued alternate take of Bing's first Victor hit with Paul Whiteman. From 1944 "Duke the Spook", "Song of the Seventh Airforce" and "Song of the Fifth Marines", are three previously unissued recordings Crosby made for the war effort, rehearsal recordings of Crosby's film songs include "It's Easy to Remember" from 1934 and "I've Got a Pocketful of Dreams" from 1938.

Here are details regarding the tracks...