WHATEVER HAPPENED TO BING CROSBY - PART 3 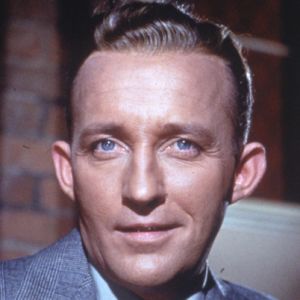 As Bing Crosby lost his high notes and settled into a less demanding bass-baritone range, he also changed his style. Not only did he abandon the jazzy scat singing of his young years, he seemed almost to lose interest in jazz itself. Though he was always capable of unlimbering for such frisky novelties as Johnny Mercer’s “I’m an Old Cowhand” (1936) and “Bob White (Whatcha Gonna Swing Tonight?)” (1937, with Connie Boswell), he now concentrated on ballads, which he sang with a quiet warmth well suited to his deeper range.

By this time, Crosby was recording for Decca, a new label whose chief producer, Jack Kapp, had encouraged him to explore a repertoire better suited to the tastes of “the masses.” Kapp assured Crosby that by shunning “ ‘hot’ songs” and concentrating instead on a wide-ranging mixture of contemporary ballads, prewar standards (like “I Love You Truly” and “Let Me Call You Sweetheart”), collaborations with other popular Decca artists like the Andrews Sisters, and ethnic novelties ranging from country to Hawaiian music, he could attain a degree of popularity “as great as ever enjoyed by any singer in this country. You have in your grasp,” Kapp added, invoking the name of the astonishingly successful Irish tenor, “the opportunity to be the John McCormack of this generation.”

Bing Crosby unhesitatingly took Jack Kapp’s advice, and the results were just as predicted. By the 40’s, he was more than a pop singer, more than a movie star. Instead, he became, as Giddins rightly says, a member of the family: “No other pop icon has ever been so thoroughly, lovingly liked—liked and trusted. . . . His was the voice of the nation, the cannily informal personification of hometown decency—friendly, unassuming, melodious, irrefutably American.” 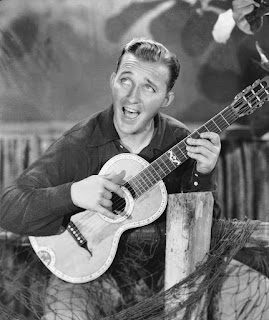 But Crosby paid a high price for allowing Jack Kapp to turn him into the musical equivalent of a Norman Rockwell Saturday Evening Post cover. Jazz is not an absolute value, and the fact that Crosby’s new style was less explicitly “jazzy” did not necessarily make it less good. (Nat “King” Cole, for example, became a better singer when he gave up jazz piano to concentrate on ballads.) The problem with the new Crosby was that his singing had become less vital, less compelling, lessinteresting. It was as though the loss of his high notes had also robbed him of his sense of musical adventure, his ability to surprise and delight the ear. The decline was not inexorable, and he would continue to make occasional memorable recordings well into the 1940’s. For the most part, though, he was now singing—figuratively as well as literally—in a lower key.

Gary Giddins has mixed feelings about Crosby’s change of style. “What his singing forfeited in muscularity,” Giddins argues, “it gained in poignancy. . . . Bing in the mid-30’s was the most quietly assured male pop singer alive.” Yet he also admits that there was more to it than that:
[I]n singling out McCormack as a career template and encouraging Bing to deflect hot songs, [Kapp] hoped to remake him as a smoother, less mannered, ultimately less expressive singer, a kind of musical comfort food. . . . [Crosby] was now on the verge of reinventing common-denominator aesthetics, creating a national popular music that pleased everyone. The cost, in the opinion of many observers, was encroaching blandness. 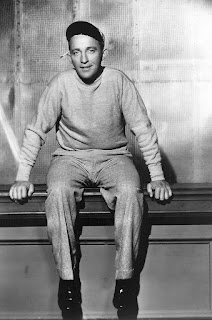 The strengths and weaknesses of the new Crosby can be heard in the great ballads he recorded during World War II “What’s New?” (Johnny Burke and Bob Haggart, 1939), “Skylark” (Johnny Mercer and Hoagy Carmichael, 1942), “It Could Happen to You” (Burke and Jimmy Van Heusen, 1943), “Long Ago and Far Away” (Ira Gershwin and Jerome Kern, 1944), and “Out of This World” (Cole Porter, 1944) rank high among the outstanding love songs of the decade, and Crosby sang them all with taste and sensitivity. But his interpretations seem almost detached, lacking the energy and ardor one might reasonably expect from a comparatively young man. To hear them is to be put in mind of Father O’Malley, the amiable priest Crosby played in the 1944 movie Going My Way. Like the good father himself, Bing Crosby in the 40’s sounded pleasant, engaging, humorous—and celibate...

SOURCE
Posted by David Lobosco at 6:18 AM