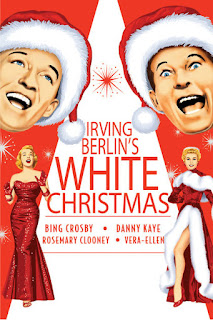 Trudy Stevens provided the singing voice for Vera-Ellen, who did not have a suitable singing voice. It was not possible to issue an "original soundtrack album" of the film, because Decca Records controlled the soundtrack rights, but Clooney was under exclusive contract with Columbia Records. Consequently, each company issued a separate "soundtrack recording": Decca issuing Selections from Irving Berlin's White Christmas, while Columbia issued Irving Berlin's White Christmas. On the former, the song "Sisters" (as well as all of Clooney's vocal parts) was recorded by Peggy Lee, while on the latter, the song was sung by Rosemary Clooney and her own sister, Betty.

Berlin wrote "A Singer, A Dancer" for Crosby and his planned co-star Fred Astaire but when he was unavailable, Berlin re-wrote it as "A Crooner – A Comic" for Crosby and Donald O'Connor, but when O'Connor left the project so did the song. Another song written by Berlin for the film was "Sittin' in the Sun (Countin' My Money)" but because of delays in production, Berlin decided to publish it independently.] Crosby and Kaye also recorded another Berlin song ("Santa Claus") for the opening WWII Christmas Eve show scene, but it was not used in the final film. Their recording of the song survives though, and the song is cute but not great. 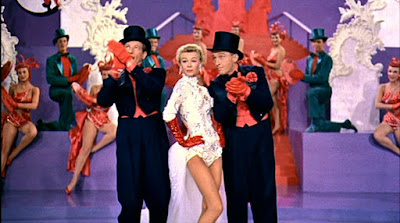 One of the greatest moments of the film is a bit Bing and Danny Kaye did off the cuff. According to Rosemary Clooney, Bing and Danny’s “Sisters” performance was not originally in the script. They were clowning around on the set, and director Michael Curtiz thought it was so funny that he decided to film it. In the scene, Crosby’s laughs are genuine and unscripted, and he was unable to hold a straight face. Clooney said the filmmakers had a better take where Crosby didn’t laugh, but the version with Crosby laughing was one that they used.

I find myself always comparing White Christmas to Holiday Inn, and I think that is unfair. The movies were done a decade apart and movie musicals were much different in 1954 than 1942. I prefer Holiday Inn, but I have a much better appreciation for White Christmas now that I have seen the film in a move theater. From the understated performance of Dean Jagger as the retired general to the superb dancing of Vera-Ellen to the banter of Crosby and Kaye, White Christmas is really a great film. Yes, the film is sentimental and cheesy at times. While I went to see the film in a theater my wife and kids ran errands, and I am glad. I had tears in eyes at the end when the general was recognized and realized he was not forgotten. I think that is a sign of a great movie that a movie made more than 60 years ago can still evoke emotion in 2017. At the end of the movie screening, the audience stood up and applauded, and I smiled to myself and thought of what a great Christmas gift this film was and is. Thanks again Bing! 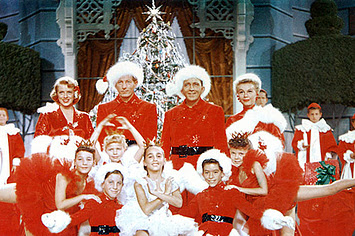