THE HUMAN SIDE OF BING 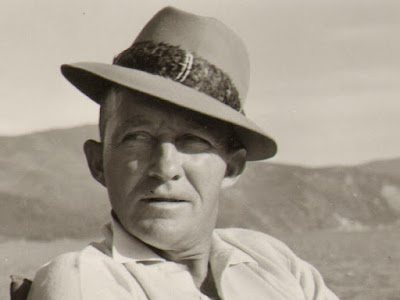 This is taken from the linear notes to the excellent Bing collection: Bing Crosby the Crooner The Columbia Years 1928-1934. The linear notes was by Michael Brooks, who was a very objective fan...

God, he must have been a complex personality. Here was a man who remained at the top of his profession for nearly half a century, with a vast fortune amassed by intelligence, guile and a hard-nosed awareness of his own talents, and still the public swallowed the whole lazy, 'call me lucky' routine. It must have amused him to project that image, yet I suppose there was enough of the mythical Crosby in the real Crosby to make it all believable.

"Then there are the stories of his extreme frugality, of his riding buses and subways when he could have hired a fleet of limosines. And the coldness he often showed towards his friends. Louis Armstrong once stated that in all the years he knew Bing, he was never once invited to his home, and it's almost mandatory to draw racial implications from that.

"But I believe that Crosby, unlike many people of his generation, was lacking in the more virulent forms of racial prejudice. Certainly he wouldn't have loved jazz the way he did and hold extreme views, yet he was an intensely private person. Cork O'Keefe, his former manager, and friend up to the time of his death, has a story to tell. 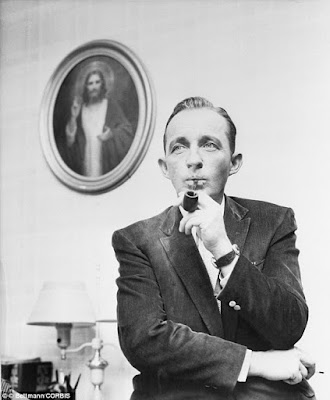 "Cork O'Keefe..'I was in Hollywood on business in the late 1930's and Bing invited me to his home. People couldn't believe it, because no one got to see him there. So I asked him about it and he said, 'You know, Cork, quite early on I made it a rule never to entertain friends at home. I work damned hard during the day and I want to rest and relax when I get home at night. Out here, all people want to do is party and socialize. It got so that I'd meet someone on the set for the first time and the next thing they'd be standing on my doorstep with a bunch of friends expecting to be invited in and entertained. So, my home's off limits to everyone. You're an exception because you're from New York and I know you won't abuse the privilege. But that's my general rule, and I'm sticking to it.' '

"Likewise, stories of his meanness are just that... stories! Bing never spent money for money's sake, on himself or on anyone else. He had more money than most people could ever hope to attain in the way of worldly goods, and he didn't see the point of adding to them just for the sake of acquisitiveness. But he did help a lot of people when they were in need: Mildred Bailey [Al Rinker's sister]; Jack Teagarden; Joe Venuti; Fud Livingston. And he contributed vast sums of money to deserving charities on the strict understanding that his actions receive no publicity.

"My own personal involvement with the great man was minuscule. I met him for the first and only time about a year before his death, and I was as nervous and excited as a kid chosen to present a trophy to a sports superstar. He was staying in New York just across from the Metropolitan Museum and as I waited for him in the lobby of his apartment building, I saw him come through the door. He was smaller than I expected and his face, though deeply lined, was instantly recognizable, right down to those icy-blue eyes. And, typically Crosby, he was carrying a bundle of dry-cleaning under his arm when the place was full of flunkies to execute such menial tasks. 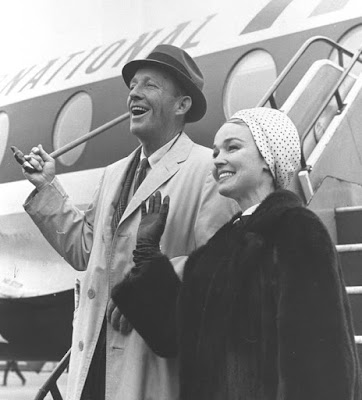 "It was awful! I got the fish-eye treatment in spades.First of all, he denied knowing about the appointment though it had been set up in advance through his agent. Then he was utterly intransigent, blocking every one of my questions skillfully with 'No, I don't remember singing that song at all,' 'No, that was too long ago,' and 'No, I don't recall such a musician,' until my carefully planned interview lay in ruins and I cursed the day I went into a record store and vouth my first Crosby 78.

"It took me months to get over the experience and come to the conclusion that Bing Crosby was a man, very human, and probably, when I saw him, very tired. But we elevate people of stature to the levels of gods, and while we fawn on them we demand total obedience, ordering them to smile and be gracious while we claw at them and bellow inanities in their ears. If they slip and allow themselves the luxury of telling some cretin to go f--k himself, we immediately howl that they have forgotten the public who made them. And I understand the sound common sense of his 'private person' philosophy, which probably extended his career and his life by decades." 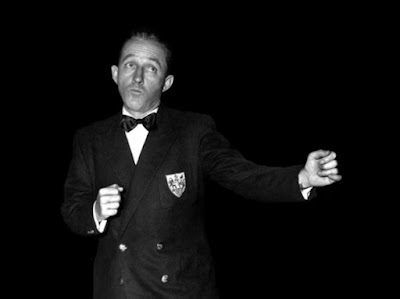 SOURCE
Posted by David Lobosco at 7:15 AM