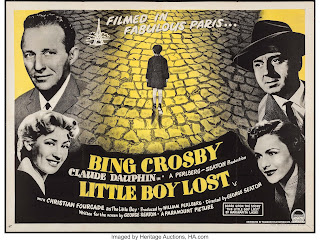 By 1953, Hollywood was ready to expose some of the horrors of war, and this movie really showed how lives were destroyed by the Nazis. The film Little Boy Lost was adapted from the book of the same name by Marganhita Laski. She originally sold the rights to actor John Mills, but he sold the rights then to Paramount Studios. The author was worried that the role that she created would be ruined by having an American singer play the title role, but after she saw the movie, she was extremely happy with the way Bing Crosby portrayed the title character.

This movie Bing made at a tough part of his life. Urged by his ailing wife Dixie and her doctors, Bing traveled to Paris in September of 1952 to film the movie. In France Bing worked a little over a month on the film before going home to be with Dixie. Bing was not fully aware of how sick Dixie was. Dixie, weakened by cancer, met Bing at the train station. However, the next day she slipped into a coma and died five days later. This marked a dark time for Bing, but even though he filmed most of Little Boy Lost already, he still had some reshoots to do. He also had pivotal scene to film with Claude Dauphin, where Dauphin makes Bing’s character listen to how his wife in the movie was murdered by the Nazis. Everyone on the set was worried how Bing was going to film the scene after his own wife passing away. Reportedly Bing got through the scene in one take, but after the scene was done Bing excused himself to his trailer, and he remained in there the rest of the day. While I can not imagine what Bing was thinking as he filmed the movie, his own personal tragedy added to the emotion of what his character was going through.

This role for Bing was different than any other movie role to date, but his superb acting should not overshadow the performance of Christian Fourcade as the orphaned boy. Bing’s character could not believe at first that the boy could be his son, because the boy was sickly and meek – but Christian Fourcade not only conveyed that weakness but brought strength to the little boy’s character. As a boy, probably the same age as the character, I was a non-athletic kid with not many friends who lived a lonely life like the boy, so I have always felt a sense of kinship to the boy, even though I was not an orphan. Nicole Maurey, as Bing’s wife, was not in the movie long, but her and Bing definitely had a great chemistry. Bing enjoyed working with Nicole so much that almost a decade later he made sure she would be cast as his love interest in 1960’s High Time. The acting in the Little Boy Lost in general is top notch.

Even though the film was a drama, there was some music in the movie. Johnny Burke and Jimmy Van Heusen wrote most of the score. They wrote two French-styled songs “A Propos De Rien” and Cela M’Est EGal”, but the standout song for me was the song “The Magic Window” which he sang to the boy while they were bonding at the zoo. It’s slight song, but a song that has always stuck with me through the years. The movie also included a cute version of “The Dark Town Strutter’s Ball” which Nicole and Bing sing together in French as they are falling in love. I wish Bing would have recorded the song, but he never did except in 1962 for one of his sing-along albums. 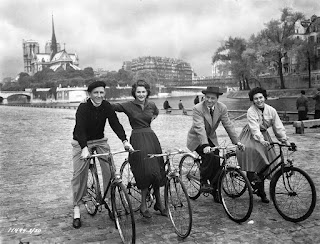 The critics seemed to like the film, and it had its New York premiere on September 21, 1953. The following day Bosley Crowther of The New York Times wrote:

“…here Mr. Crosby is playing a straight dramatic role in a picture of deep emotional content and genuinely tragic, overtones. Except for two or three song numbers that are worked in consistently, there are few other points of contact with the bright and chipper Bingle of old. And yet it must be said for Mr. Crosby that he manages to convey a strong sense of real emotional torment in a tragically wracked character and that he serves as a credible buffer in a candidly heart-socking film..."

I watched this film as a young boy in the mid-1980s, feeling much like the little boy at the orphanage, but now over thirty years later I am viewing the film as a married man with two beautiful children, one being a son, and I can not fathom what Bing Crosby’s character was going through trying to find his son. It is a horror I would never want to face. Knowing now that Bing’s wife Dixie was dying during the making of the movie, makes Bing’s acting even more remarkable in the movie. It is a shame that this film has never been officially released on VHS, let alone DVD, but if you can find a copy to view, this is required Bing Crosby watching. It is a movie that will remain in your mind a long time after watching it. 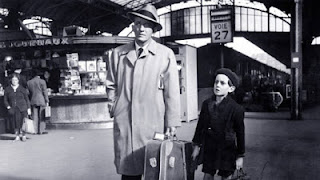