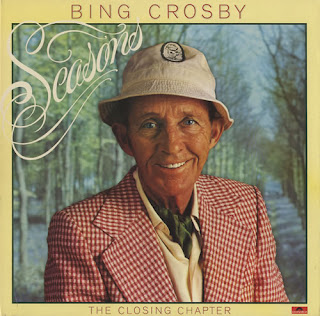 To start out the month of June, here is another great article from rising Bing Crosby guru, ModernBingFan0377...

I am here again for another review, today's being Bing's masterful last album, Seasons. I might review Bing's last BBC sessions at one point, but as of now it will just be Seasons. I will give each song a description and review then an overall review at the end.

Seasons - A really nice song sung by Bing with a great vocal performance. This song is like Sinatra's 'It Was A Very Good Year" in many ways, although the funny thing is that this song had the original French melody with lyrics added for Bing, whereas Bing's equivalent of 'My Way' (That's What Life Is All About) was written in English and had English writers which is the opposite of the Frank equivalents.

On The Very First Day Of The Year - A very nice overlook of the year with a very bouncy arrangement from Pete Moore that I find personally very catchy.

June In January - This song is hard to review as it is a great classic from Bing, and personally I can't decide between this one and the original 1934 version.

Spring Will Be A Little Late This Year - This is a wonderful classic, although it's interesting performed as a swinger, that is not a complaint though.

April Showers - Although his '50s version is vocally superior I much prefer the arrangement on this one, so this might be my favorite version of it from Bing. His vocal is a little weak on this one, but being 74 and a few weeks before his untimely and sad death it's still very amazing.

June Is Bustin' Out All Over - A somewhat cheesy song gets given a great performance that makes it less cheesy. Bing's voice is a little weak on the slow parts on this one, but on the faster parts he's great.

In The Good Old Summertime - Another good old chestnut, that is given the same treatment as the previous only it helps the chestnut quality of it and Bing's voice is good throughout.

Summer Wind - I know this is blasphemy to say, but I prefer Bing's performance of this compared to Sinatra's. Bing had a great way to portray his vocal as reminiscing on the past and this song really deserves and rightfully gets that treatment from Bing, Frank's swinger doesn't fit the song as much to me.

Autumn In New York - Another Frank staple I prefer Bing's version of, Frank's Capitol comes very close to me. Pete Moore did an amazing job on the arrangement on this beautiful song.

September Song - Another definitive, to me anyway, version of a great song, that gets given the same reminiscing treatment as Summer Wind and it works out great for this song, Bing's vocal is great on this song. Pete Moore on these slower songs has really outdone himself.

Sleigh Ride - This might have to been my least favorite Christmas song Bing sang, his Decca version is great, but this one? The first 30 second and the bridging parts are pretty good, but the rest of it gets this very dated arrangement that doesn't fit Bing or the song well at all. Crosby's vocal on it is okay, but the arrangement really brings this version down

Yesterday When I Was Young - This song is great, Bing does great on it and it's a great last song for Bing's last album. 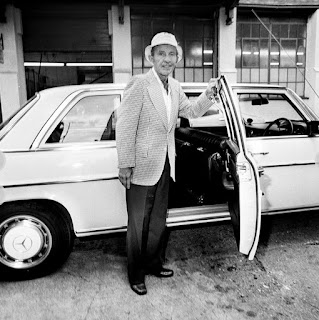 Album overview: I gotta say this is one of the best concept albums I own. Besides it being Bing's last album which makes it a staple enough to listen to, it's a masterpiece of an album I'd say, and even Sleigh Ride, my least favorite, has it's charms. By this point he had came a long way from 'I've Got The Girl', and it shows, but in a great way. This album is one that should be known, it's amazing. Most of Bing's album were great in the mid-late 70s, but this, to me, takes the cake for the best one. Seasons is more of a passage through life, than a concept album of seasonal songs. It leads you through the start, a happy beginning, a love lost that is then found again, the middle of life with all it's glories and triumphs, the slowing of the age once you retire and reminisce, with it ending off with a family and friend filled last few years, and then finally looking over your own life. I can't say this is a 10/10 because of a certain winter song, but in my book it's a winner!

Posted by David Lobosco at 7:49 AM