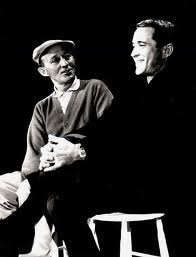 Perry Como was born Pierino Ronald Como in Canonsburg, Pennsylvania on May 18, 1912, the son of Pietro Como, a mill hand, and Lucia Travaglini Como, immigrants from Palena, Italy. The seventh of thirteen children, Perry Como earned a few cents a day working after school in a local barbershop in Canonsburg.

Later, while attending high school, he operated his own barbershop. Como, performing at wedding receptions and other functions, gained local recognition for his singing ability. One of the few vocalists of his generation to read music, he played both organ and baritone horn. Como's popularity skyrocketed in the late 1930s after he became the featured vocalist with the Ted Weems orchestra.

When the Weems band broke up in the early 1940s, NBC offered him a contract to share star billing with singer Jo Stafford on the Chesterfield Supper Club, a radio show broadcast Mondays through Fridays. Como usually sang romantic ballads during each broadcast. When that show came to Friday night television in the late 1940s Como continued to be a featured vocalist, supported by the Mitchell Ayres Orchestra and the Fontane Sisters. A smorgasbord of comedy routines, dancing, and singing, the show gave him the opportunity to reveal a captivating personality. His neckties and business suits, however, did not complement his casual style and in later shows he wore cardigan sweaters, dubbed Perry Como sweaters by his fans.

The program was soon moved to a half-hour slot on Sundays, competing with Ed Sullivan's Toast of the Town. Meanwhile, Como was also performing before enthusiastic and often frenetic audiences at the Paramount Theater in New York City and the Steel Pier in Atlantic City. "Perry Como was the heartthrob of the ladies at that time," remarked David Hamid, Jr., part owner of the Steel Pier. In 1950 Como signed with CBS, hosting his own program for five seasons. In 1955 he went back to NBC, starring in the weekly Perry Como Show, later titled The Kraft Music Hall. He remained with NBC until 1963. From the late 1940s through the early 1960s Como was a pioneer in the television variety show genre. His singing style evolved into the popular musical form called easy listening, influencing a generation of lounge singers. Beginning with his first, on Christmas Eve 1948, Como's Christmas specials on ABC-TV became an integral part of the holiday season. These annual events were accompanied by his three Christmas albums (1946-1948) for the RCA Victor label. 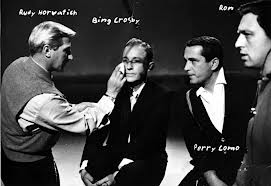 A fourth Christmas album, recorded for Como's 1993-1994 Irish Christmas television special, was his only non-RCA recording in half a century. When ABC decided to cancel Como's annual Christmas special in 1987, the Dallas Morning News mounted a "Save Perry" letter-writing campaign. A fan wrote: "If Perry Como is removed from Christmas, can Santa Claus be far behind?"

Como was one of the most successful performers of the twentieth century, next to Bing Crosby. Along with nonsense tunes like "Hot Diggity Dog Ziggity Boom," lighthearted songs like "Papa Loves Mambo," and even a rock-and-roll number, "Juke Box Baby," he left an enduring legacy as an interpreter of the romantic ballad. In 1943 in the midst of a strike by the American Federation of Musicians, Como recorded with only vocal accompaniment "Goodbye Sue" for the RCA Victor label. Among his most popular romantic ballads are "Dream Along with Me," "Don't Let the Stars Get in Your Eyes," "Temptation," "Because," "Till the End of Time," "Prisoner of Love," "And I Love You So," and "It's Impossible." Often accompanied by the Mitchell Ayres Orchestra and the Ray Charles Singers, Como sold more than one hundred million records and had fourteen tunes that were ranked number one musical hits. In 1946 he was named top-selling male singer by Billboard. As late as 1973 he received a Grammy award nomination as best male pop vocalist for "And I Love You So." 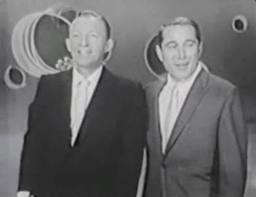 His achievements during the rock-and-roll era, when ballad crooners were falling by the wayside, were particularly remarkable. During the final years of his long life Como spent most of his time at his home in Jupiter Inlet Beach Colony near Palm Beach, Florida, golfing, fishing, and taking long walks with his wife. Near the time of his death he had become a great-grandfather. He devoted himself to various charities, including his annual golf benefits at Duke University in North Carolina, and even found time to visit radio stations that carried Weekend with Perry, a weekly program syndicated throughout the United States. Combining a gentle voice with a pleasant personality, Como celebrated in life and in song romantic love and lifelong fidelity. He parlayed these values and his ability to express them in song into one of the most successful careers in twentieth-century popular entertainment. Perry Como died in his sleep on May 12, 2001 --a national treasure was lost... 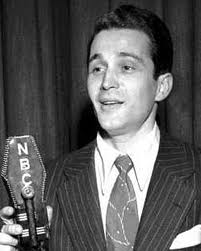