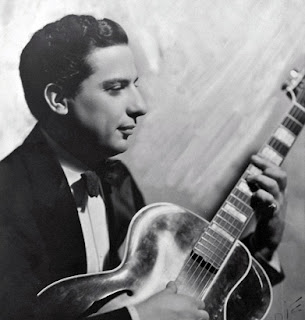 EDDIE LANG: THE FATHER OF JAZZ GUITAR By Dan DeLuca

From Django Reinhardt to Jimi Hendrix, the names that commonly appear on argument-starting lists of the greatest and most influential guitarists of the 20th century are familiar. But there's one flat-picking virtuoso from South Philadelphia typically left out of the conversation, whose music has receded into obscurity despite a trailblazing career cut short by his tragic death in 1933: Eddie Lang. That's an injustice an aggregation of local musicians and Lang enthusiasts are doing their best to redress, starting with a multi-act show that will bring Lang's music to life at Chris' Jazz Cafe in Center City on Monday. It's the 108th anniversary of the birth of Lang, who died of complications from a tonsillectomy that his friend and collaborator, Bing Crosby, urged him to get. And it's been declared Eddie Lang Day in Philadelphia in a proclamation from Mayor Nutter that "urges all citizens to be aware of Eddie Lang's history-making musical legacy as well as the role of Philadelphia in the development of early jazz music."

And it's about time, say ardent fans of Lang, frustrated that such a prodigiously talented and innovative figure could be all but forgotten by all but jazz cognoscenti. "He's somebody who died at a young age who had a brief, meteoric career," says Aaron Luis Levinson, the Grammy-winning Philadelphia record producer who helmed Rediscovering Lonnie Johnson, the 2008 release that re-created three of the historic guitar duets between Lang and African American guitarist Johnson that broke the recording industry's color line in 1928 and 1929. At Chris' on Monday, all 12 of the duets - which Lang recorded under the pseudonym Blind Willie Dunn so as to not arouse suspicion of music miscegenation - will be reprised by guitarists Jef Lee Johnson and Jonathan Dichter, who will "play" Lang. "He's not someone anybody ever remembers to talk about when they talk about Philadelphia music," Levinson says. "There's something really unfair about cultural memory. It's like anything that happened before Elvis Presley gets treated like it happened in the dinosaur age." Lang's life story may be little known, but it reads like an unwritten screenplay about a dazzlingly talented, thoroughly modern musician.

Born Salvatore Massaro in 1902, Lang took his stage name from a favorite basketball player for the club team the Philadelphia Sphas (an acronym for the South Philadelphia Hebrew Association). The son of an Italian American immigrant instrument maker was among the pioneers of the flat-picking style (which involves playing with a plectrum held by, rather than attached to, the fingers) and is credited with popularizing the guitar over the louder, previously more prevalent banjo, as a key instrument for the jazz bands of the 1920s. So much so that the historical marker across the street from the Saloon restaurant in Lang's old neighborhood at Seventh and Clymer Streets, put up in 1995, proclaims him "the Father of Jazz Guitar." Along with his childhood friend, violinist Joe Venuti, Lang laid the foundation for the improvisational gypsy jazz stylings of Reinhardt and his violin-playing counterpart, Stephane Grappelli. Crosby biographer Gary Giddins writes that in contrast to Venuti's merry-prankster personality, Lang was "quiet, thoughtful and responsible, a ruminative Catholic." In A Pocketful of Dreams: Bing Crosby, The Early Years, 1903-1940, Giddins writes that after cornetist Bix Beiderbecke, Lang and Venuti were "arguably the most influential white jazz musicians of the 1920s, serving as a sort of template for the famed European jazz ensemble of the 1930s, the Quintette du Hot Club de France." Lang and Venuti made their names together playing in Philadelphia and Atlantic City showrooms, and according to Dichter, a music historian as well as a guitar teacher at the Baldwin School in Bryn Mawr, toured in England with the novelty band the Mound City Blue Blowers.

In 1929, they were hired by bandleader Paul Whiteman, and it was there that Lang first began to accompany Crosby, who said of Lang's playing: "He made you want to ride and go." Giddins calls Lang Crosby's "jazz conscience," and the singer's "most intimate friend, almost certainly the closest he would ever have." Crosby brought Lang for the 1932 film The Big Broadcast. He also negotiated a deal for Lang to have speaking parts in all his movies, which is why he urged him to have an operation to rectify the chronic hoarseness attributed to tonsillitis. Richard Barnes, a guitarist and photographer who lives in Aston, is the driving force behind Eddie Lang Day in Philadelphia and will perform at Chris' with his band, the Blackbird Society Orchestra. He'll also do a number of Lang-Venuti duets with violinist Michael Salsburg. Barnes first got the Lang bug after he saw Leon Redbone perform in West Philadelphia in the early 1990s. "That was my exposure to 1920s music," Barnes says. "I got a couple of CDs, and when you listen to Paul Whiteman, Bix Beiderbecke, there was always this one guitar player that I really liked. It was totally different. Not strumming. "Not blues. He plays in an almost pianolike style. Very interesting chord inversions, always complementing the singer. A real distinct sound. It turns out it was Eddie Lang."

Barnes put an ad on Craigslist this year, reading "Eddie Lang Day, This October." One of the interested parties to inquire was Mike Hood, who suggested Chris' as a venue, and will play on Monday with his band Cornbread Five. The event will raise money for the Eddie Lang Music Scholarship Program for underprivileged children, and Barnes hopes to turn it into an annual Eddie Lang Festival at Chris' every October. Barnes, who says business for his 1920s-style Blackbird Society Orchestra is looking up thanks to interest in HBO's Atlantic City mob drama Boardwalk Empire, got the idea to approach the Nutter administration from one of his first musical memories. "When I was 13, my first concert was seeing Elton John at the Spectrum," he remembers. "And there was a picture of Frank Rizzo in the newspaper with Elton John, when he declared it Elton John Day. I thought it would be so cool if I could get the mayor to do that with Eddie Lang." The attention is well-deserved, says Dichter, who plays in a band called Beau Django, and who talked to Les Paul about Lang's influence before the guitarist's death at 94 last year. "He said it was just too long ago," Dichter says. "It's convenient to forget." Barnes says he's always on a mission to bring Lang's music to a wider audience. "I'm not trying to form the fan club or anything," he says. "But I do think that people would appreciate this music and enjoy it. It's something you don't hear all the time."

Posted by David Lobosco at 7:02 AM