Here is a nice review of the new set of Bing Crosby movies coming out. I believe it it the issue of the year for Bing fans, and it is definitely on my Christmas gift list... 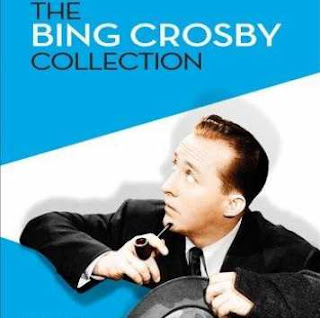 The Bing Crosby Collection – DVD Review By Jeff Swindoll One of the most popular entertainers of all-time, Bing Crosby was a superstar of movies, music, radio and television during a spectacular career that lasted over 50 years. He remains beloved around the world for his easygoing charm, mesmerizing voice ...more. Tis the season for Bing and Universal releases some of the singer’s films under their Studio Backlot banner (keep ‘em coming!).

It’s a cornucopia of performances, with some support from other famous faces, from the popular crooner that is sure to entertain. Bing Crosby (1903-1977) was one of the first multimedia stars. He appears on recordings, radio, and movies as well as appearing on television when that medium materialized. The chart-topper’s Christmas specials would become part of the yearly holidays as well as his iconic take on White Christmas. During it all he made it look incredibly easy with his laidback style and delivery.

Universal collects several of his films in this fantastic collection for the follower of Bing or of cinema. Each of the three discs features two of the titles below. College Humor (1933): Professor Danvers (Bing Crosby) finds himself in a love triangle with star football player Mandrake (Richard Arlen) and Barbara (Mary Carlisle). Mandrake has eyes for Barbara, but she has eyes for the Professor. Hilarity ensues. We’re not Dressing (1934): High society gal Doris Worthington (Carole Lombard) is entertaining on her yacht when it sinks. She, Edith (Ethel Merman), Uncle Hubert (Leon Errol), and Princes Michael (Ray Milland) and Alexander (Jay Henry) Stofani make it to show with singing sailor Stephen Jones (Crosby). The wealthy folks do not want to take the survivalist sailor’s orders but that changes quickly. Here is my Heart (1934): J. Paul Jones (Crosby) is a wealthy singer interested in an antique dueling pistol. It’s in the possession of Russian princess Alexandria (Kitty Carlisile). Jones goes undercover to get a handle on the pistol and ends up romancing the princess. Mississippi (1934): Tom Grayson (Crosby) is down in the old south to be engaged to Elvira (Gail Patrick). That engagement is nullified when Tom is challenged to a duel to defend Elvira’s honor and he takes the pacifist’s way out. He’s kicked off the plantation in shame and gets a job as a singer on the boozy Commodore’s (W.C. Fields) steamboat. Sing You Sinners (1938): Brothers Joe (Crosby), David (Fred MacMurray), and Mike (Donald O’Connor) are a singing trio. Joe is the only one with a love of singing and the other brothers are pestered by their mother (Elizabeth Patterson) to get out of the crooning game. Joe has others plans, but those plans have a habit of getting him into debt. Welcome Stranger (1947): Dr. McRory (Barry Fitzgerald) wants to go on vacation and hires Dr. Pearson (Crosby) to watch the shop while he’s away. However, the two men’s styles cash them to clash, all while Pearson romances a school teacher (Joan Caulfield).

They’re all breezy fun. College Humor is a madcap romp set on the campus and a big Busby Berkley musical number “The Old Ox Road.” We’re not Dressing seems like a version of Gilligan’s Island but still has a fun cast and musical numbers. Both offer support from George Burns and Gracie Allen. Here is my Heart is also a nice romp with Crosby going from singer to waiter in disguise. Mississippi is a delight thanks to a boozy turn by W.C. Fields and old south charm. Sing You Sinners teams Crosby with MacMurray and O’Conner and even throws in some drama. There’s an attempt to recreate the dynamic of Crosby’s Oscar winner Going My Way by adding Fitzgerald to the mix. It may not rise to that occasion but it is great to see the two onscreen again. All the films are presented in fullscreen. Special features boil down to theatrical trailers for We’re not Dressing, Mississippi, Sing you Sinners, and Welcome Stranger (2 minutes each). The case does contain a text bio and a listing of Crosby’s awards and honors. Bing did it all and this collection offers some of the films (and he made many of them). None of them will win any Oscars, but Bing’s charm and songs certainly make them a pleasant experience...
Posted by David Lobosco at 8:53 AM