GOING MY WAY: THE SERIES ON DVD 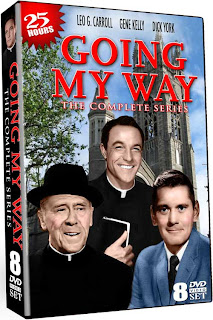 In this charming television series remake of the Oscar winning 1944 film "Going My Way" starring Bing Crosby, dancer and actor Gene Kelly (American in Paris) takes on Crosby's role of Father O'Malley, a Catholic priest sent to St. Dominick's, a poor parish in New York City. There he teams up with Father Fitzgibbon (Leo G. Carroll), the elderly pastor of St. Dom's, and his housekeeper Mrs. Featherstone (Nydia Westerman) As luck would have it, Father O'Malley's boyhood friend Tom, played by none other than Dick York ( Bewitched ), runs a secular youth center in the neighborhood.

The guest cast of Going My Way was impressive. Among the many stars who appeared were Anne Francis and George Kennedy (A Man for Mary), Eddy Bracken and Harry Morgan (Like My Own Brother), Jack Warden (Not Good Enough for My Sister), Kevin McCarthy (Ask Me No Questions), Beverly Garland (A Saint for Mama), and James Whitmore (Tell Me When You Get to Heaven), just to name a few.

Fifty year after its first broadcast in 1962, Going My Way's light touch and big-hearted themes make it great entertainment for the whole family with great acting and stories that touch the soul with warmth, humor and drama, as life's inescapable situations unfold, and are resolved in surprising ways.

Timeless Media Group is releasing an 8-DVD collection of Going My Way - The Complete Series, with all 30 episodes of the 1962 program that was the ABC network's spin-off/remake of the 1944 theatrical classic. Running more than 1500 minutes, this show will be presented in the original black-and-white full screen video, with English mono audio. It will be available at general retail on December 6th, and you can pre-order it from Amazon.com right away. Cost is $49.98 SRP, and here's the just-finalized package art, straight from the studio:

SOURCE
Posted by David Lobosco at 3:06 AM