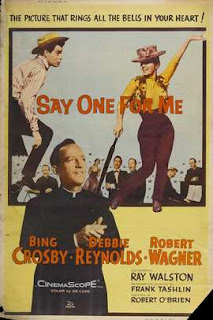 The movie Say One For Me is often on the list of worst movies of all time. When I found this review from the NY Times on June 20,1959 I was very interested in reading the review. The soundtrack is more interesting than the film but here is what the Times had to say...

AFTER all the times Bing Crosby has played a priest in films, you'd think by now he would be a Bishop or a Monsignor, at least. But no, he is still a parish pastor in Frank Tashlin's "Say One for Me," another romance of religion and show business, which came to the Paramount yesterday.

Mr. Crosby is still atmosphering informally in cassock and biretta (or just toupee) in and about the vicinity of a small Catholic church off Broadway, mixing piety and wisecracks in about equal measures and snatching brands from the burning that is going on all the time just up the street.

The principal brand that takes some snatching is a young night club impresario, entertainer and general sin-doer among the showgirls at the club. This fellow, played by Robert Wagner, is a real gone type ("know what I mean"), given to impudent indifference toward the squareness of a priest. He tees off on Father Conroy (that's our Bing, of course), accuses him of stealing his routines for an old vaudevillian and other such. Needless to say, the good father regards him dubiously.

Particularly does he do so because one of his best parishioners, a little college girl played by Debbie Reynolds, goes to work at this fellow's club. Of course, she is not a usual showgirl, she just needs money for a father who is ill, and so there is really no good reason for the burning anxiety of Father Bing. But he worries and probes the situation. This takes him to the club. This leads him to the pious business of poking his mitts into the fire. 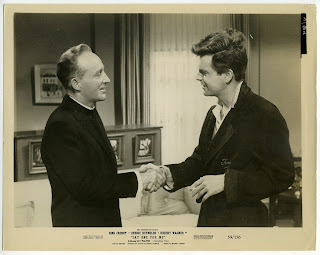 In the process, he does score some rescues. The most obvious and delightful save he makes is that of a beat piano player who is trying to make his home in a bottle of booze. This character, played by Ray Walston, is more of Bing's vintage and type, and the two do some gratifying chumming and crooning in the war on John Barleycorn.

Father Bing also plucks from the embers a moody showgirl who has a tiny tot without the benefit of a marriage license. He gives baby and mother the sign.

But we really can't credit him with saving the impudent impresario. That job is mainly done by Miss Reynolds, who looks great in tight slacks or opera hose and also in the color and wide-screen effectively used here. It is she who really angles the young scapegrace to 2 A. M. mass (or what Father Bing calls his "late, late LATE show"). But then Bing's successes in the priesthood have usually had strong assists from Cupid's bow.

It is a pleasant show-world entertainment, this obvious "Say One for Me," full of pretty girls with shapely legs, a few song numbers (two sung by Bing) and religious images. Robert O'Brien has contributed a screen play that is loaded with slang. Broadway gags that are easily comprehended and not too much clerical sentiment. Connie Gilchrist as the priest's housekeeper has some of the cutest lines and, next to Mr. Walston, is the most solid comic in the show. 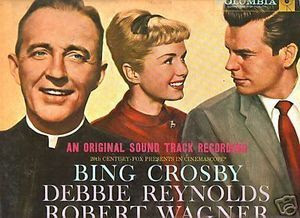 As for Bing—well, he's just about as usual, a little less lively, perhaps, a little older looking, but still casual and sincere. He'll never make Monsignor. He'll always be a parish priest, whenever he turns his collar backward, because you always sense a sport shirt underneath...

SOURCE
Posted by David Lobosco at 8:35 AM