MY FAVORITE AND LEAST FAVORITE PRIESTS 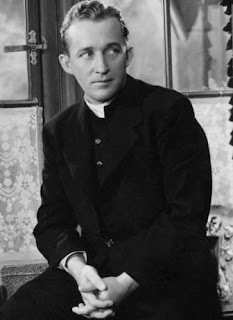 There is not a lot of Bing in this article, but I think it is interesting what the writer had to say about Bing...

My Favorite And Least Favorite Movie Priests
by Pat Archbold

There have been many movies that have priests as important characters. There are movies about saints and some of them are awesome. But my post today is about priests as characters, as men involved in a story. I was watching the excellent Tom Wilkinson as Father Moore in “The Exorcism of Emily Rose” the other day on cable. It got me to thinking about some of my favorite priests as characters and also some of my least favorite.

So for discussion purposes, I thought I would get into the who’s and whys. After all, what is a Catholic blog for if not discussing movie priests. On with it.

Let’s just get this one out of the way. Max Von Awesome (aka Sydow) as Father Merrin in the Exorcist. Max played Merrin perfectly. He flawlessly embodied Merrin with reluctance, resolution, and resignation. He knew he would likely die in this exorcism, but he went ahead with it. He conveys an aged and long earned wisdom that is doubly remarkable considering he was only 44 at the time. Max has the dubious honor of being tops on my list of the creepiest movie Jesuses, But for Merrin, Max was perfect.

This bring up a point. I like to see men cast as priests portraying priests as men. Not crazy macho or anything silly like that, just men. A couple of examples.

Pat O’Brien in “Angels with Dirty Faces.” Karl Malden in “On the Waterfront” and Ward Bond in “The Quiet Man” These were some of the manliest actors of their time. The frequently portrayed characters that were tough but with hearts of gold and that’s what we got from their priest portrayals. I wish we would see more of this in the movies.

Bing. Bing Crosby is two sides of a coin. On the one hand, Bing’s legendary charm and ease made him one of the most unforgettable screen priests of all time. On the other hand, Bing set a standard for the parish priest that was impossible to live up to. And when you watch it now, you remember that Bing was the young progressive priest. Anyway, love Bing. But I wouldn’t be surprised if some priests dislike Bing for the same reason. 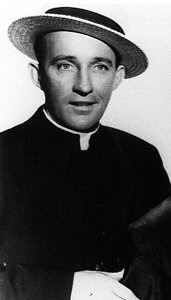 Speaking about Bing, Barry Fitzgerald’s parish priest deserves honorable mention for his portrayal of Fr. Fitzgibbons. There was a lovable humanness in his character.

Now for some good and bad. Let’s start with Jeremy Irons in The Mission. I loved his character through and through and his refusal to take up arms to carry the monstrance even though it made death certain was magnificent.

And that brings us to one of my least favorite priests, Robert DeNiro. DeNiro’s acting in The Mission was very good, but his character’s choice to fight had liberation theology written all over it. If this was the only role to judge DeNiro’s screen priesthood by, he might be forgiven. But Bobby has a trifecta of bad priest roles. Remember that awful movie with Sean Penn called “We’re No Angels” where they were criminals pretending to be priests. Sorry, pretending to be dumb priests. Awful. But it gets worse, seriously worse. In Sleepers, the climax of the movie occurs when De Niro’s priest character chooses to perjure himself. No doubt about it. Bobby is a great gangster, but a bad screen priest.

Special mention must be made for Ed Norton. I like Ed Norton, but his portrayal of a priest caught in a love triangle with Jenna Elfman and Ben Stiller has to take the cake. Futuristic vampire killing priests are more believable than Ed Norton in this movie. Vampires would have made “Keeping the Faith” much better. They would have added an extra half star bring its rating to a..half star.

What are some of your favorites and least favorites...

SOURCE
Posted by David Lobosco at 5:53 AM