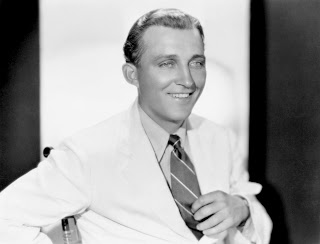 Bing Crosby died more than 30 years ago, in 1977, but his legacy and his music are still with us, especially during the Christmas holidays season. Many of his best-selling records were Christmas songs, dating back to 1942’s perennial classic, “White Christmas.” Among his other gold records: “Silent Night” (1942), “I’ll Be Home For Christmas” (1943), and “Jingle Bells” (with the Andrews Sisters) (1943). There is still something warm and comforting about that rich voice singing the Yuletide favorites and Crosby’s original Christmas recordings can be found for auction on sites like eBay while they are also to be found on currently available CDs.

Harry Lillis Crosby was born May 3, 1903, in Tacoma, Washington. As a boy he was a fan of a comic strip called The Bingville Bugle, which starred a character with protruding ears named Bingo. Crosby also had ears that stuck out and soon his friends were calling him “Bingo,” which was eventually shortened to “Bing.” The name stuck with him all his life.

Bing’s parents loved music and loved to sing, and Crosby was briefly given formal singing lessons, but he soon dropped out. He was more interested in popular songs than classical opera, and his hero was Al Jolson. In college, planning to become a lawyer, Crosby bought a drum set by mail-order and was soon good enough on them to be invited to join a local band, The Musicaladers, where he met Al Rinker. The band was so successful that Crosby dropped out of college in his senior year to focus on a career in music. But the band itself fell apart, leaving Bing and Al on their own. They took Al’s Model T and went to Los Angeles, where Al’s sister, jazz singer Mildred Bailey, helped them get into show business. Within a few weeks of their arrival in Los Angeles in 1925 Bing and Al were on the vaudeville circuit and singing in movie theaters throughout California.

That’s when Paul Whiteman, who called himself “The King of Jazz” and led the most popular band in America, heard them. He hired them to sing with his band, which they joined at the Tivoli Theatre in Chicago in December, 1926. Crosby used the opportunity to study music with such Whiteman band musicians as Bix Beiderbecke, Tommy and Jimmy Dorsey, Joe Venuti and Eddie Lang.

While waiting to join Whiteman, Crosby and Rinker made their first record with the Don Clark band. Clark was a former member of Whiteman’s orchestra, and on October 18, 1926, he recorded them singing “I’ve Got the Girl,” which was released by Columbia Records (824-D), with an instrumental piece on the B-side. On December 22 they cut their first records with Whiteman, “Wistful and Blue” and “Pretty Lips.” 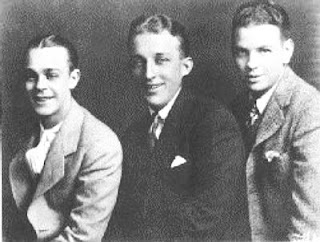 When Whiteman’s orchestra opened at the Paramount in New York in January, 1927, there was a problem with the duo’s vocals. The theater had no amplification and the orchestra was drowning out the singers. To overcome this problem a third singer, Harry Barris, was added to the duo – which became a trio known as “The Rhythm Boys.”

Crosby was surprisingly nonchalant about his work, drank a lot, and developed a “playboy” image. He was jailed for drunk driving after an accident which put his date through the windshield in November, 1929. This was while the movie, The King of Jazz, featuring the Paul Whiteman Orchestra, was being filmed, and Crosby had to be escorted from jail to the studio whenever the Rhythm Boys were needed, but he missed out on the chance to take a major solo role in the movie. Whiteman “released” the Rhythm Boys from his orchestra in May, 1930.

Crosby and the Rhythm Boys trio began singing with the Gus Arnheim band at the Coconut Grove in Los Angeles. The Grove did live radio broadcasts and Crosby could be heard throughout California, which brought increasing crowds to hear him in person. At the same time Arnheim was pushing Crosby to the front as a soloist, leaving the other two in the trio to sing backup. On January 19, 1931 Crosby recorded his first solo, “I Surrender Dear,” written by Harry Barris, and it was a hit. 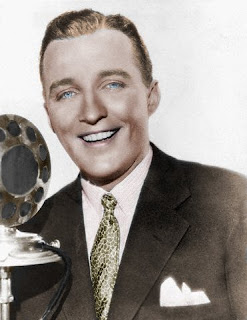 But as Crosby’s solo career began to take off he started skipping performances at the Grove. This led the club’s manager to dock his pay, and Crosby walked out in protest, taking the Rhythm Boys with him. When the club persuaded the local musician’s union to ban the trio for breach of contract, the Rhythm Boys dissolved. (They performed together only once after that, in a July 4, 1943 reunion for the NBC radio broadcast of Paul Whiteman Presents. A excerpt from the program was included on the MCA anthology on CD, Bing: His Legendary Years.)