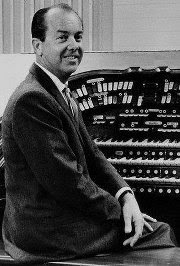 I used to complain about Buddy Cole's backing of Bing Crosby, but upon listening to the recordings more, they are really enjoyable. Not being an organ music fan, Cole's orchestrations never did much for me, but they do have an appeal backing Bing. Edwin LeMar Cole, known as Buddy Cole, was born December 15, 1916 in Irving, Illinois, and started his musical career in the theater playing between movies.

He moved to Hollywood and played with a couple of bands, most notably the Alvino Ray big band, before becoming a studio musician. He played piano for Bing Crosby for a number of years and also toured with Rosemary Clooney. Albums with his combo were recorded on piano and Hammond organ. He became Bing's primary orchestrator in the mid 1950s after Bing and John Scott Trotter ended their association. Like Cole, Bing was a fan of the organ and had a great admiration for Buddy Cole's work. Buddy backed Bing in the recording studio as well as on radio and television.

Cole recorded for Capitol Records as both Buddy Cole and Eddie LaMar and His Orchestra. He did both commercial and transcription recordings for Capitol.

Although primarily known as a pianist, he had an abiding love for the organ, both Hammond and theatre pipe. In his capacity as a studio musician, he worked extensively with Henry Mancini, who used his distinctive Hammond organ sound for the sound track to the TV series "Mr. Lucky." He also recorded several albums for Warner Brothers records on piano, Hammond organ and theatre pipe organ. 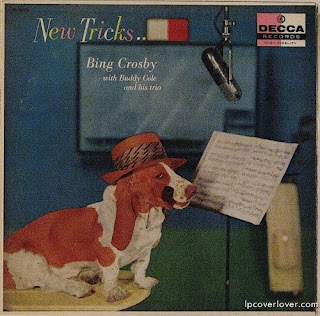 The theatre organ heard on these albums was the 17-rank Wurlitzer organ from the United Artists theatre plus nine ranks from a one-time radio studio Robert Morton theatre organ which he installed in the garage of a former residence in North Hollywood and on which he recorded three albums for the Columbia and Capitol labels. The combined ranks were installed in a specially built studio next to his home.

Two albums - "Modern Pipe Organ" and "Autumn Nocturne" were recorded for Warner Brothers, as well as two albums done in conjunction with arranger Monty Kelly, one of which contained an arrangement of Richard Rodgers' Slaughter on Tenth Avenue, and the other of which contained transcriptions of big band arrangements with spaces for the organ. These two albums - for the Alshire label - were his last recordings. 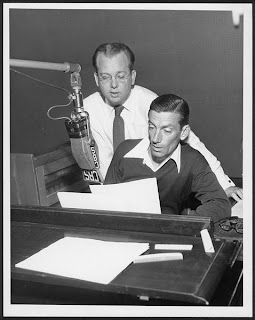 He married Yvonne King, member of the King Sisters, and with her had two daughters, actress Tina Cole and Cathy Cole Green.

He suffered a series of heart attacks during the early sixties culminating in a fatal one November 15,1964...
Posted by David Lobosco at 6:38 AM