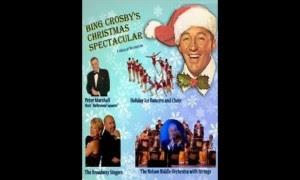 In a June column I first told readers about a new stage tour coming to Chicagoland heralded as a new Christmas tribute to holiday crooner Bing Crosby, called "The Bing Crosby Christmas Spectacular: A Musical Recreation" featuring a cast of 40 performers and starring Peter Marshall as the host. Marshall, 85, was the host of the original "Hollywood Squares" game show from 1966 to 1981. Joining Marshall for the tour was the Nelson Riddle Orchestra, The Broadway Singers, The Holiday Choir and Ice Dancers, along with popular Crosby film clips and a splashy array of costumes created by Bob Mackie.

There were supposed to be two performances, 3 p.m. and 7:30 p.m. on Thursday at the Rialto Square Theatre in Joliet, with tickets ranging from $25 to $55.

As it turns out, Thursday's shows are canceled, as is this entire tour.

I'm told the producers for this new show had not secured all of the necessary permission to greenlight this show using the name and likeness of Bing Crosby.

HLC Properties is a Nevada limited partnership formed in 1980 for the purpose of managing the entertainment empire created by Harry Lillis Crosby, professionally known as Bing Crosby, who died in 1977.

The general partner of HLC, Hillsborough Productions, Inc., manages the operations, including making all creative and business decisions about the interests, with lawyer Mark Brodka, the second husband of actress Mary Crosby, Bing's daughter, handling most matters.

Ron Ranke of Ron Ranke and Associates Ltd. of Barrington, Ill., began touting this new Christmas stage tour back in July sending out the following press statement: "In 2011, for the first time, a live Broadway styled production co-starring a cast of 40 performers will give audiences the opportunity to re-live those magical Crosby moments in a musical recreation. It's a return to the big holiday extravaganza experience so rarely seen on stage today. Bing's greatest Christmas hits come to life in an inspiring setting of themed holiday stage props to revisit the Crooner himself captured in an amazing collection of film-clip highlights of Bing and his friends Bob Hope, Danny Kaye, Rosemary Clooney, David Bowie, Frank Sinatra and Louis Armstrong."

The Palace Theatre in Waterbury, Conn., which had the show booked for Nov. 26, informed patrons: "Bing Crosby Christmas Spectacular tour that was slated to make a pre-holiday stop at the Palace Theater has canceled all 2011 tour dates due to an issue with the show's licensing agreement."

SOURCE
Posted by David Lobosco at 6:06 AM