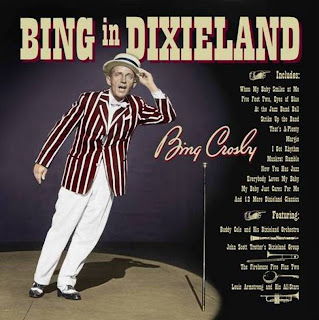 For the past two years now, Bing Crosby Enterprises, run by Bing's widow Kathryn Crosby, has issued some pretty rare and amazing work that Bing has done. I always think I have most of the recordings by Bing, but I am amazed at this new CD issue. It is one of the best issues I have seen this year.

The album Bing In Dixieland, contains some tremendous Dixieland music that Bing did on his radio show in the 1950s. There is not a bad recording in the bunch and some of the recordings are completely new to me like Bing's renditions of "Strike Up The Band", "I'd Climb The Highest Mountains", and "The Object Of My Affection" to name a few. The standout for me is "I'd Climb The Highest Mountain", which is a favorite song of mine. I have a jazz instrumental version by Mugsy Spanier, a vocal version by Connee Boswell from the 1950s, and a swinging version by Jo Stafford in the 1960s, but Bing's recording is tops.

Bing was influenced by the Dixieland sound in the 1920s, and you can hear it in his recordings here. He never sounded more at home or happier. If you like great music or Bing Crosby or Dixieland then this is the music for you! You can only buy this CD from the Bing Crosby website: here. 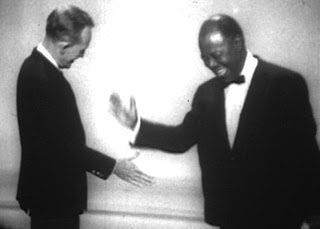 Posted by David Lobosco at 6:33 AM