BING AND BROTHER CAN YOU SPARE A DIME 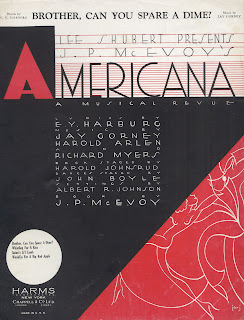 It’s amazing how much you can learn about history from simply listening to a song.

Brother, Can you Spare a Dime was the Great Depression’s anthem. I’ve heard the title lines of that song sung in the past, but today is the first time that I’ve ever actually listened to the entire song. I’m not just impressed. I’m amazed.

“Brother, Can You Spare a Dime?”, also sung as “Buddy, Can You Spare a Dime?”, is one of the best-known American songs of the Great Depression. Written in 1931 by lyricist E. Y. “Yip” Harburg and composer Jay Gorney, “Brother, Can You Spare a Dime?” was part of the 1932 musical New Americana; the melody is based on a Russian lullaby Gorney heard as a child. It became best known, however, through recordings by Bing Crosby and Rudy Vallee. Both versions were released right before Franklin Delano Roosevelt’s election to the presidency and both became number one hits on the charts. The Brunswick Crosby recording became the best-selling record of its period, and came to be viewed as an anthem of the shattered dreams of the era.”

I’m amazed by the song’s startling honesty. ”Brother” is a powerful indictment of an economic and political system under which ordinary men were enticed into working for a dream–other people’s dreams, government’s dreams, rich people’s dreams–and then left penniless...

Labels: Brother Can You Spare A Dime