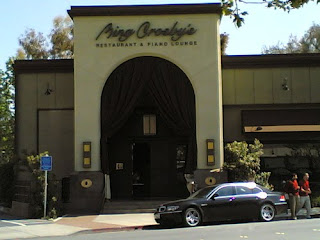 Walnut Creek's Bing Crosby's closes for good by Associated Press When one of Walnut Creek's most upscale restaurants closes abruptly, serving its final cocktail on New Year's Eve, people wonder what happened -- especially if it might mean a restaurant empire is crumbling. The reason for the sudden closure of Bing Crosby's Restaurant at Broadway Plaza and South Main Street is simple -- the economy, according to Rick Dudum, chief financial officer of Dudum Sports and Entertainment, often called DSE. "When we started we were the only ones on the block," he said. "And now with Ruth's Chris (and) Fleming's, we were splitting our fine dining with everyone else. They can withstand a downturn in business; we couldn't."

With 280 seats, Bing's was one of Walnut Creek's largest restaurants. Since it opened in 2004 it was, at times, a prominent hot spot featuring a piano bar and tall-back booth seats with a "country club-plush" decor. But its heyday had passed years ago, according to owners. The other four Bing's restaurants, in Southern California, have also closed in recent months, Dudum said. So too did Joe DiMaggio's Italian Chophouse in San Francisco, which the restaurant group owned. It closed in October. "The economy over the last two or three years has taken its toll," he said. "We've been trying to work it out."

The signs of financial trouble for the business are apparent. In October, Orange County placed a $459,035 lien against the company, listing as debtors the San Diego Bing's and DSE, based in Walnut Creek. In addition, there are several other federal, state and county tax liens for smaller amounts posted in recent months against the Walnut Creek company. Records do not indicate which debts, if any, have been repaid. Rick Dudum said it's still early in the closure process and that the liens are still being paid off. There are no plans for DSE to file bankruptcy, nor plans to reopen any of its restaurants, he said. That's unfortunate news for Trina Reilley, who loved Bing's and has more than $200 in gift cards for the restaurant. She also recently gave away gift cards to friends. "I just feel bad for the people we gave the certificates to," she said. "It's embarrassing." Rick Dudum said he doesn't know whether the cards will be honored anywhere else.

The downfall of DiMaggio's and the Southern California Bing's restaurants isn't why the Walnut Creek location closed, Dudum said -- every restaurant is separate and each its own corporation. Because the Dudum name is linked with other restaurants in Walnut Creek, many who heard of the Bing's closure asked whether McCovey's and the Maria Maria Mexican Cantina, which the Dudum company opened in partnership with famed musician Carlos Santana, would soon shutter. Dudum said Maria, Maria is "prospering" and will remain open. But IRS records show a $103,357 federal tax lien filed on Aug. 20 for Maria Maria California based in Walnut Creek. As for McCovey's, Rocky Dudum Sr. bought the restaurant in June from DSE, owned and run by his sons, Rick and Jeff. Dudum Sr. would not disclose how much he paid for the restaurant dedicated to San Francisco Giants Hall of Famer Willie McCovey, but "it was a very pretty price, a large price," he said. A collector since 1959 and friend of McCovey for decades, Dudum Sr. owns all the baseball memorabilia in the restaurant. Without that, he said, there would have been no restaurant for his sons to sell. "I wanted this place here for my grandchildren and for me," said Dudum Sr., who has taken over running the daily operation of the restaurant. As for a $76,676 federal tax lien on the restaurant filed in August, Dudum Sr. said it has since been paid off. He said he cried the most when Bing's closed down, especially for his sons.

"I am are very proud of them and what they have done in the business world for 10 years, but the economy has killed those boys," he said. What will happen to the former Bing's building is unknown; it is owned by a family trust in San Francisco, not the Dudums. Jay Hoyer, president of the Walnut Creek Chamber of Commerce, said he doesn't know what will take Bing's place. But he points out that Neiman Marcus is being built down the block, and across the street a new retail-residential building complex will soon be going up. "It's still a prime location," Hoyer said, "and I think there will be a number of opportunities." All of the restaurants were not owned by the Crosby family.
Posted by David Lobosco at 5:51 AM