DIXIE: IS IT A RACIST MOVIE 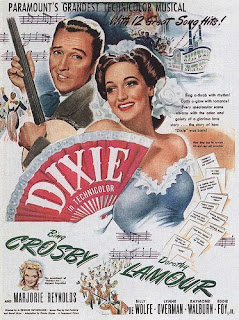 Back in the 1940s, race relations were quite different than they are today in most of the United States. African-Americans had little freedom and rights back then, nearly 80 years after President Lincolm emancipated the slaves. Even though African-American soldiers fought valiantly during World War II against the Axis Powers, they were not looked upon as equals. The entertainment industry was a little different with the popularity of bands such as Cab Calloway and Duke Ellington and singers like Ella Fitzgerald and Billie Holliday. However, they had a long way to go as well.

A popular medium at the time was the use of blackface in performing. Blackface was theatrical makeup used in minstrel shows, and later vaudeville and movies. The use of blackface is almost universally denounced today in 2011, but the debate rages on if it should be deleted and/or forgotten from movies of the 1940s. One such movie that uses blackface a lot was DIXIE (1943).

DIXIE, directed by A. Edward Sutherland, capitalized on the then current trend of musical biographies of popular songwriters of the twentieth century, a cycle that appeared to have begun with the life of George M. Cohan in YANKEE DOODLE DANDY (1942). Unlike this and others made during this period, DIXIE goes back a century, prior to the Civil War in fact, depicting the life of a composer named Daniel Decatur Emmett. His life-story is as unknown as his name itself. The fictional screenplay does toy with the facts before leading to the purpose of its film title, the composition that's to become Emmett's most recognizable American song of all, "Dixie."

Bing Crosby, one of Hollywood's top box office attractions, is properly cast as Dan Emmett. It reunites him with HOLIDAY INN (1942) co-star, Marjorie Reynolds, and re-teams him opposite Dorothy Lamour, in her only film opposite Crosby outside from the seven "Road to" comedies all featuring Bob Hope as part of the funny trio. 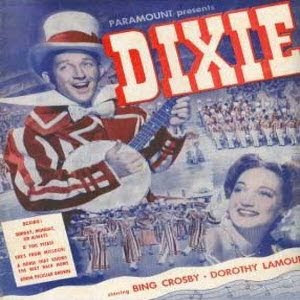 Dan Emmett's life is portrayed more to the personification of Çrosby himself, that of a good-natured singer/composer whose only weakness is his forgetfulness, especially when it comes to leaving his lit up smoking pipe around that causes a fire. He is engaged to Jean Mason (Marjorie Reynolds), a beautiful blonde Southern belle whose father (Grant Mitchell) disapproves of their courtship because he feels Dan to be irresponsible and won't amount to anything. Mason's more convinced now after Dan's lit-up pipe has caused the burning and destruction of Mason's old Kentucky home. However, Mason consents to Jean's marriage only if Dan can prove himself capable by doubling his $500 life savings to $1,000 within six months. (A similar opening lifted from the more familiar Fred Astaire musical, SWING TIME, in 1936).

Leaving his clerical job, Dan seeks his fortune in New Orleans. While riverboat bound, he loses all of his $500 to Mr. Bones (Billy De Wolfe), a suave actor and cardsharp. After discovering that he had been cheated, he sets out to find Mr. Bones. Instead of beating him for the return of his money, composer and actor form a partnership leading to the origins of what was to be known as a Minstrel Show. Dan, who has already encountered Millie Cook (Dorothy Lamour) at the boarding house to whom Bones and other out-of work actors (Lynne Overman and Eddie Foy Jr.) owe back rent for their lodgings to her trusting father (Raymond Walburn), finds himself in love with her, in spite that she's the aggressor who made the first move. Dan decides to return to Kentucky and break his engagement to Jean. Upon his return, Dan finds the girl he once loved to be a victim of a crippling disease, polio, that puts him in a difficult situation as to which girl he should marry, and which should get his swan song.

The movie has never been issued on video or DVD leading many people to the conclusion that it has been removed from circulation. However, the movie has been aired on AMC, as late as 1989. The question is...is DIXIE a racist movie? While blackface is outdated and just plain wrong in 2011, the movie DIXIE was a 1940s movie depicting life in the 1860s. The entertainment scene in the 1860s was mostly blackface due to the popularity of the minstrel show. While it is hard to watch DIXIE today because of the black face scenes, it is a part of history that should not be brushed under the carpet. As a society, we need to view the movie from a history standpoint. If we do not learn from history, we are doomed to repeat it. Watching 1943's DIXIE, we need to view it from a historical standpoint. We can look at it from the viewpoint of it being a 1940s depiction of 1860s life. Watching DIXIE some 68 years after it is made does not make us a racist, but it should make us aware and proud of how far we have come...and maybe how far we still need to go. 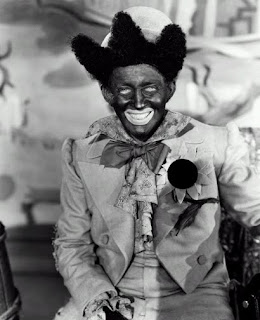 Posted by David Lobosco at 6:28 AM