BING AND THE ANDREW SISTERS 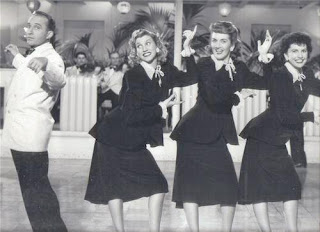 Ensemble vocals have been a big part of the sound of popular music in America for many years. In the early nineteen forties this style became a readily identifiable feature of some of the most popular songs of the day. Frank Sinatra with the Pied Pipers fronting the Tommy Dorsey Orchestra; Ray Eberle with The Modernaires with the Glen Miller Orchestra; and Dick Haymes with the Song Spinners were three of the best known and most popular of these groups. The fourth ensemble was a bit different and most unique - both parts of the group were stars of the biggest magnitude in their own right, and combined on record they were unmatched in style and tuneful excellence. They were Bing Crosby and the Andrews Sisters, and their recorded combination made some of the most enjoyable music of the 1940s.

Crosby had been a huge star attraction on records since the late twenties, in the early thirties he transferred that star power to the movie screens, and he came into his own as a dominant force in radio in the 1940s. The Andrews Sisters emerged in the late thirties as a top musical act and branched out into motion pictures at Universal in the early forties.(For an absolutely superb reading on the Sisters, see William Ruhlmann's "Three Sides To Every Story" in the Jan 20, 1995 issue of Goldmine). The Andrews Sisters recorded with a number of musicians including Guy Lombardo, Dick Haymes, Jimmy Dorsey, Sammy Kay, Carmen Miranda, Ernest Tubb, Les Paul, Burl Ives, and Danny Kaye. However their most tuneful and memorable vocal combination was with Bing Crosby, the most influential vocalist up until that time in the early forties when the collaboration began. 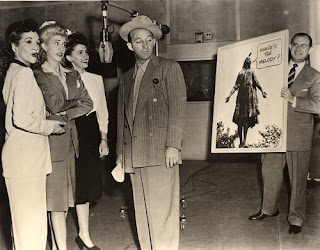 The first record of many (all on the Decca label) by this most heralded combination was in 1939 when they recorded "Ciribiribin" and "Yodeling Jive". The record reached as high as number four on the hit parade and carried into 1940. It was three years before they got another chance to vocalize together in the recording studio, and in late 1943, Bing and the Andrews did a cover of Al Dexter's big number one hit "Pistol Packin' Mama". The flip side was a feel good propaganda tune called "Victory Polka"and they made it to the number two position. It was then apparent that this was certainly a combination that had great potential as record sellers.They got together two months later to record the Christmas pair "Santa Claus Is Coming To Town" and "Jingle Bells".

The next year the group recorded the Louis Jordan tune "Is You Is, Or Is You Ain't Ma' Baby" and was backed by another propaganda piece called "There'll Be A Hot Time In The Town of Berlin". This was a huge two sided hit with "Is You Is" getting to number two and "Hot Time" making it all the way to the top spot on the charts and remaining there for six weeks. The third huge hit by the ensemble in the year 1944 was another number one seller, "Don't Fence Me In" from the film "Hollywood Canteen". The last chorus of this tune is the quintessential sound of this collaboration, with impeccable four part harmony that really makes the record a treasure. (I will always remember this song and its references to the West, and a later Andrews Sisters tune "The Lady From 29 Palms" because for the few years that those records were popular, I lived in Southern California out near 29 Palms). "The Three Caballeros" the title tune from the Disney film was the other side and also did fairly well on the best seller charts. 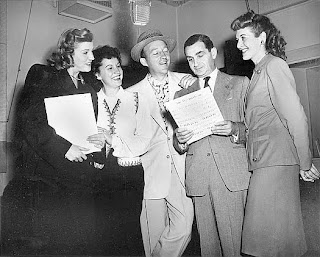 Into the year 1945 it seemed the combination could do no wrong. They next recorded Johnny Mercer's "Ac-Cent-Tchu-Ate The Positive" from the film "Here Come The Waves" and it was another number two hit record for Decca. The flip side for the record was "There's A Fellow In Poughkeepsie". As they say, the hits just kept on coming. "Along The Navajo Trail" a lovely tune with Western thoughts went to number two, and the reverse side was "Good Good Good". While Bing and the Andrews Sisters went their separate ways for a while from mid 1945, Decca Records re-released two previous hits "Pistol Packin' Mama" and "Don't Fence Me In" in early 1946. Later in the year the ensemble was back in the recording studio with a great tune from the Broadway show "Call Me Mister" called "South America Take It Away" and the great forties post war tune "Route Sixty Six". This record also reached the number two position on the charts. It was the last time the group would produce this big a seller, but there was still much great music ahead.

In the year 1947, a much covered song from the film "Variety Girl" was a top ten record for Bing and the Andrews Sisters - "Tallahassee" and the flip side was "Go West Young Man". Soon after, Dick Haymes joined Bing in accompanying the Sisters on two songs from the Broadway show "Annie Get Your Gun" - There's No Business Like Show Business" and "Anything You Can Do". Despite the amount of talent on the record it barely charted. The same dearth of sales greeted the two part recording of "The Freedom Train" and the re-release of "Santa Claus Is Coming To Town" and "Jingle Bells". In early 1948 Bing and the sisters recorded "Apalachicola, Fla." and "You Don't Have To Know The Language" from the film "Road To Rio" with little success, and the same was true for the next 1948 record "160 Acres" and "At The Flying W".

In 1949 "Betsy" and "Wedding Day" did not chart, but "Have I Told You Lately That I Love You" and "Quicksilver" did much better with "Quicksilver" reaching number four and remaining on the best sellers list for four months making it their biggest hit in four years. The change in fortune did not last as "Ask Me No Questions" and "Lock Stock And Barrel", and "High On The List" and "Life Is So Peculiar" did not chart at all. At the end of the year two Christmas records were released by Decca - Twelve Days of Christmas"/ "Here Comes Santa Claus" and "Poppa Santa Claus" / "Mele Kalikimaka". In particular, "Here Comes Santa Claus" has a wonderful last chorus where the four voices blend in perfect harmony and make for a masterful song. 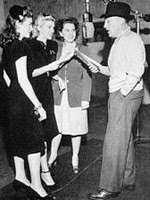 By 1951 the ensemble had been recording for twelve years, and the magic was still there as they did a cover of Guy Mitchell's "Sparrow In The Treetop" which was a solid top ten seller that remained on the charts for four months. However the magic as it was, was short lived. The vocal collaboration never again hit the charts. The other releases of 1951 did not fair well - "Black Ball Ferry Line" / "The Yodeling Ghost" and "Betsy" / "Wedding Day" did not appear on the charts nor did the new releases the following year - "I'll Si Si Ya in Bahia" and "The Live Oak Tree", "Cool Water" and "South Rampart Street Parade", and re-releases of two Christmas records which filled the schedule. This concluded the recording history of this most remarkable group of performers. Both went on to continued successes of varying degrees and Decca would re-release some of their work from time to time.

Through most of the nineteen forties and into the fifties, the sound of the vocal ensemble consisting of Bing Crosby and the Andrews Sisters were consistent hitmakers and creators of many memorable musical moments. They remained unequaled as a collaborative vocal unit and produced one of the defining ingredients of the sound of the war and post war era...

UPDATE: Sadly Patty Andrews, the last surviving Andrews Sister, passed away on Janaury 30, 2013. Words can not express the great loss that this is to the music community. You can read more about it here:

Labels: Andrew Sisters, duets, The Road To Rio, You Don't Have To Know The Language