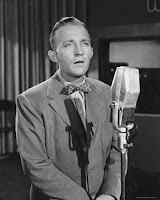 Fans of Bing Crosby are lucky to have the 60 plus movies that he made in his long association with Hollywood. Diehard fans of the crooner even get excited when a recording by Bing is played in a movie, whether as a major focus or just in the background. This has not just happened since Bing died in 1977...as early as 1954 Bing's recording of "To See You Is Too Love You" was featured in the Hitchcock classic REAR WINDOW. Here are some of the other movies with Bing's audio appearances:

PAPER MOON (1973) Peter Bogdanovitch's film relies solely on commercial recordings and radio programmes to provide background music for this film which is set in the U.S.A. in the 1930s. Bing's recording of "Just One More Chance" is featured.

THE MAN WHO FELL TO EARTH (1976) In this Bing can be heard singing "True Love". At the film's end Candy Clark, playing David Bowie's girlfriend, goes to an apartment in a Father Christmas outfit. For about forty seconds Bing's Capitol recording is played on the soundtrack as Bowie and Clark move around the room exchanging a little dialogue.

THE BRINK'S JOB (1978) This film, based on fact and about a bank robbery, begins in 1944 and in an early scene set in Boston the American Decca recording of "Accentuate the Positive", by Bing and the Andrews Sisters is heard. This serves to indicate the era without resorting to a caption or explanatory dialogue. At the end of the film the same recording is heard as the gang of robbers depicted in the film ascend the courthouse steps for a trial prior to imprisonment.

PENNIES FROM HEAVEN (1982) The 36 years separating this version from the original Crosby movie will prevent any confusion as to what you are paying to see. This 1982 version uses recordings from the 1930s to advance the storyline. The film's setting is the thirties with the actors miming to 78s from that decade. Bing's contribution is "Did You Ever See a Dream Walking". A soundtrack album to tie in with the film's release featured Steve Martin singing the title song.

FRANCES (1982) Bing and the Andrews Sisters are heard singing "Love is so Terrific" as background music in this screen biography of Bing's one time leading lady Frances Farmer. This song is taken from the Philco Radio Time broadcast of 31st March, 1948.

A CHRISTMAS STORY (1983) This warm family film is set in an Indiana suburb in the 1940s. It takes a nostalgic look at middle-America and concentrates on a young boy's view of Christmas. It shows how the child reacts to the gift of an air rifle, which he wants as a present. Bing's Decca 78s are used to give a seasonal early 1940's atmosphere to the film by the playing of "Jingle Bells", "It's Beginning to Look Like Christmas" and "Santa Claus is Coming To Town". Bob Clark directed this Metro-Goldwyn-Mayer release.

TOUGH GUYS (1986) This film was very enjoyable despite getting panned by critics. Burt Lancaster and Kirk Douglas tried to live up to their performances in Gunfight at the O.K. Corral made thirty years earlier. Tough Guys depicts them as two ex-cons released from prison and still spiritually belonging to the 1950s. Bing sings "Don't Get Around Much Anymore" on the soundtrack. It is Crosby's 1970's recording made for Concord although Burt Lancaster is shown placing a 78 on the record turntable. 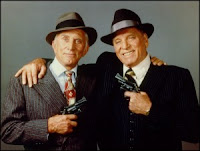 RADIO DAYS (1987) Woody Allens's affectionate tribute to the golden days of American radio crams loads of music from the 1930s and 1940s onto the nostalgia provoking soundtrack. Bing's contribution is part of the Decca recording of "Piston Packin' Mama" sung with the Andrews Sisters.

SOMEONE TO LOVE (1987) Director Henry Jaglom again selected a Crosby recording for one of his films. Jaglom also played the film's leading role as a film maker. The reviewer for the "Monthly Film Bulletin" wrote: "the use of evocative songs like "Long Ago and Far Away" conjure a nostalgic yearning for romantic times and distant places". It is Bing's Decca recording of that song which is used to help perfectly capture the mood of one of the film's introspective moments.

NATIONAL LAMPOON'S CHRISTMAS VACATION (1989) This film charts the ongoing misfortunes of the Griswold family. Chevy Chase is again as cast as Clark W. Griswold, jnr., for whom disaster lom round every corner. In a scene set just before Chrismas Day he gazes wistfully into the distance and a sequence illustrates his dreams: a large swimming pool on a hot summer's day surrounded by bikini clad girls. The musical item that blends Christmas sentiment with the warm outdoors happens to be the Hawaiian song "Mele Kalikimaka", sung by Bing and the Andrews Sisters. A further nod to the Crosby influence on Christmas comes at Griswold's darkest hour when the family guests pack to leave the disaster stricken house. Cheve Chase bars their way, grits his teeth and says, "Nobody leaves. This is going to be the happiest Christmas since Bing Crosby tap danced with Danny Kaye".

AVALON (1990) The film tells in flashback the family fortunes of the Krichinsky family from 1914 to the mid-60s. Avalon is a suburb of Baltimore and is the backdrop for mapping out the family fortunes from grandfather Sam Krichinsky downwards. Bing's soundtrack contribution is "Silver Bells" which he duets with Carol Richards. Other musical items include Jolson's "Anniversary Song", Buddy Clark singing "I'll Dance at Your Wedding" and "Racing With the Moon" from Vaughan Monroe.

HUDSON HAWK (1991) This American comedy thriller was the first major financial disaster of the 1990s as far as Hollywood was concerned. Bing's recording of "Swinging on a Star" plays a major part in the plot. Willis as the Hudson Hawk of the title plans to steal a Leonardo de Vinci from a New York auction house. He estimates the heist will take the length of time it takes to sing "Swinging on a Star". Does he pull it off? Do you care?

ENEMY OF THE STATE (1998) This is an intelligent thriller set in the U.S.A. towards the end of the twentieth century. The film's underlying theme of this Touchstone Picture is the extent of technology's ability to invade privacy. Will Smith plays an innocent citizen sucked into a web of political corruption. His financial background is distorted and his marriage almost destroyed. The film's final scene provides a happy ending. The credits roll. Bing's 1947 Decca recording of "They Can't Take That Away From Me" is played as the audience leaves the cinema with Crosby's re-assuring voice reminding them it was only a film.

HOLLYWOOD ENDING (2001) Directed by Woody Allen, this film sees his return to comedy form with a subject that many would not find amusing. The plot is about an Academy Award winning director who becomes blind. Allen avoids original scores for his movies. He frequently uses recordings from the 1930s and 1940s. In view of the setting of Hollywood Ending it is not surprising that he makes use of Bing's recording of "Going Hollywood".

BAD SANTA (2003) One of the few Christmas season films for adults has Billy Bob Thornton playing department store Santa each year. He chooses a different store annually, insults the kids who sit on his knee and robs the stores after closing time. Disney’s Buena Vista company had a financial hand in this 15 rated un-family film. About twenty minutes before the end of the film there is a scene which takes place on Christmas Eve. Prior to carrying out another robbery Billy Bob is assisting in dressing a Christmas tree and hanging Christmas stockings. On the film’s soundtrack we hear Bing singing “Have Yourself a Merry Little Christmas. Almost all of the 1962 Warner Bros. recording is used.

NANNY MCPHEE AND THE BIG BANG (2010) Hollywood likes to make sequels where a previous success makes a follow up picture easy to market. Hence Nanny McPhee now having to contend with a big bang. This is a film for all the family and an early sequence depicts three children cleaning up the farm in readiness for their two cousins coming to stay. The accompanying soundtrack features Bing singing "The Best Things in Life are Free". .It is the first use in a film of a Ken Barnes session recording. Bing was in London to record the song in 1975. The film was originally titled Nanny McPhee Returns on its American release. 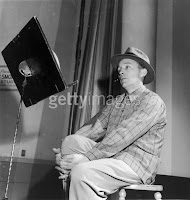 SOURCE
Posted by David Lobosco at 7:25 AM