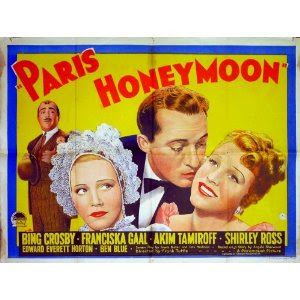 Bing Crosby plays Lucky Lawton a cowboy millionaire who struck gold on his land and would be considered nouveau riche. He's about to marry a Countess played by Shirley Ross, but a hitch has gone through with her divorce. They both come over to Paris to try and straighten it out.

While there Crosby buys a castle from Akim Tamiroff in some unknown Balkan town called Pushtalnik. It's also time for Pushtalnik's Rose Festival and the Rose Queen traditionally resides in the castle. That would be Franciska Gaal and she arrives and Crosby has to get rid of her before Ross joins him in wedlock.

Now if you're already thinking this plot is silly, it is. But that's the kind of thing that was done in the 1930s in Hollywood. And it's the kind of story that Bing Crosby was often asked to carry on the strength of his popularity and charisma. He does this admirably with assist from some nice songs by Leo Robin and Ralph Rainger. 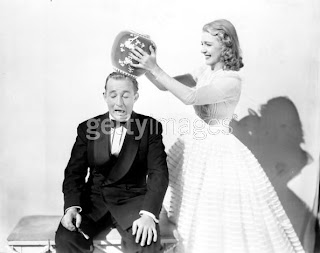 Robin and Rainger were one hot songwriting team in Hollywood at that time. They were fresh off an Oscar in 1938 for Thanks for the Memory which became the beloved theme song of Crosby's Road picture partner Bob Hope. Not often remembered is that Hope introduced this song with Shirley Ross and also recorded it with her.

Shirley Ross was at home equally on Broadway as well as Hollywood, she probably shuttled back and forth so she never got really established in either. A good singer with a pleasant voice, the woman was destined to be a footnote in Hollywood history. She also introduced Blue Moon in Manhattan Melodrama, albeit with a different lyric and entitled The Bad in Every Man. Larry Hart changed the lyric and the song became a smash, but not for Shirley Ross. 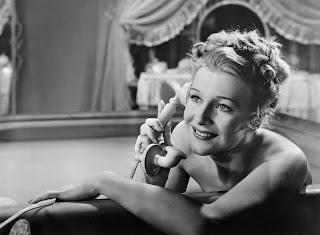 Akim Tamiroff was a great addition to any film he was in. Here he plays Peter Karloca, mayor of Pushtalnik. Karloca spent some time in the United States, proudly studying our political methods in Chicago and adapting them to Pushtalnik. He and Ben Blue who plays the village idiot who turns the table on Tamiroff in the end, have some great scenes together and separately.

Robin and Rainger's score consists of The Funny Old Hills, a cowboy ballad that is a personal favorite of mine, I Have Eyes which he sings as a duet via telephone with Ross, You're A Sweet Little Headache which Bing expresses his feeling for Gaal tongue in cheek and finally Joobalai which is one of the few huge production numbers in 30s Bing Crosby film. Nice, but boy what Busby Berkeley could have done here. 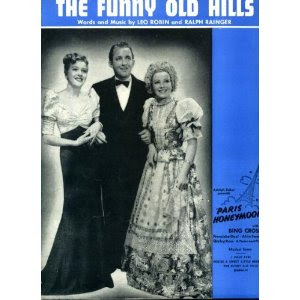 Gaal was a continental cabaret entertainer who Cecil B. DeMille discovered and tried to make a star, just like his rival producer Sam Goldwyn tried with Anna Sten. Paris Honeymoon was one of only two other films she made before returning to Europe just in time for World War II.

There's another number, sort of. One night Bing and butler Edward Everett Horton try to spook Gaal from the castle. Bing plays a disembodied head who is rolled down the dark hallway singing, I Ain't Got Nobody for a couple of lines. When Decca released the Bing's Hollywood record series, they included a great jazz recording that Crosby made with Woody Herman's band a couple of years after Paris Honeymoon was out.

I can't forget Edward Everett Horton who's prissy stuffiness provided a great foil for many stars. At that time primarily known for his work with Fred Astaire, Horton and Bing work well together and it's a pity they didn't do more.

A few months after Paris Honeymoon was released, Europe was at war and that mythical village of Pushtalnik would have been caught up in it. But we Americans like our escapist entertainment and Paris Honeymoon certainly fills that bill...
Posted by David Lobosco at 5:53 AM