When I first discovered this album in the early 1990s when I was beginning my acquiring of everything Bing, I had high hopes for the album. I am a big fan of both Bing and Count Basie. The album was sort of a let down, but it is worth a listen to... 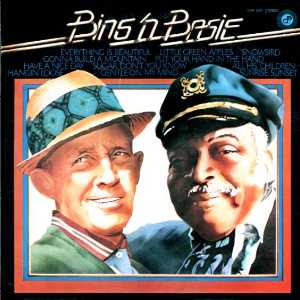 Bing 'n' Basie is a 1972 vinyl album recorded for Daybreak Records by Bing Crosby, accompanied by Count Basie and his Orchestra. The orchestral tracks were laid down over three days at the end of February and the beginning of March, 1972 at Amigo Studios, North Hollywood. Crosby added his voice to the pre-recorded orchestral tracks during three sessions on March 14, 15 and 16, 1972 at Coast Recorders Studio, Bush Street, San Francisco. Bing Crosby also added his voice to "If I Had A Hammer" and while this has appeared on pirate issues it has never been commercially released.

Howard Lucraft writing in Variety commented:"Interesting that Bing sounds better today to many than in his Paul Whiteman days over 40 years ago when his keys were about a third higher. He could be more adventurous range-wise back then. He used to feature ‘Old Man River’ in D flat, going to a top F. On this new LP wisely tunes are mainly up-tempo. Crosby reportedly sang to tracks prerecorded by the Basie band. Sam Nestico’s charts are swinging. Something should have been done about that final top D flat on ‘Put Your Hand in the Hand’. Otherwise album is highly effective - simple with charm. The slower ‘Sugar, Don’t You Know’ by Louis Bellson is a great new number."

Down Beat said: "This release is likely to do considerably more for Crosby’s reputation than for Basie’s. That’s usually the way it works when a jazz group teams with a popular vocalist. On the other hand, it is Crosby’s reputation that is in considerably greater need of a boost than Basie’s, so perhaps in the long run it’s a fair shake for everyone... (Crosby) is in fine voice all the way, and the choice of material is from among the best contemporary tunes, excepting two ringers (Hangin’, Day), which are the sort of nonentities that singers use to open TV variety specials." 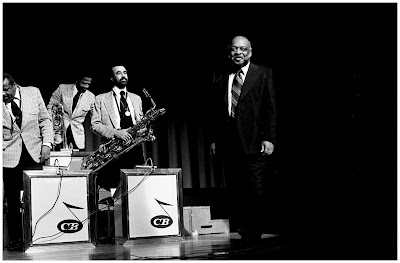 Posted by David Lobosco at 1:10 PM