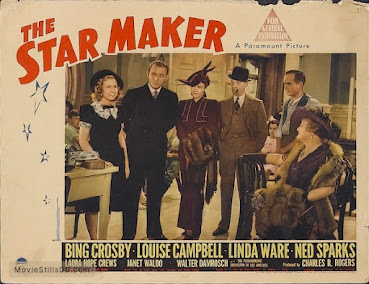 The plot was slight, but the original story was much more different than what was filmed. According to Gary Giddins in his Bing Crosby biography “A Pocketful of Dreams”, Gary writes “The script somehow devolved from the story of Edwards to the story of Bing. By the time it was ready to shoot, The Star Maker so little resembled Edwards and his career that the name of the protagonist was changed to Larry Earl”. Bing himself would go on and comment about the film in 1976 that it was the most difficult film he had ever made because the director Roy Del Ruth wanted to film the original story, but he disliked what was done with the script. Roy had go ahead with the movie, but he was not happy. Like most Bing movies of the day, the audience was not there for the plot but the music. Bing got to sing some older Gus Edwards composed songs like “If I Was A Millionaire”, “Sunbonnet Sue”, “In My Merry Oldsmobile”, and my personal favorite “School Days”. I taught my 8-year-old daughter to sing the song when she was five, and she still sings it now! Most if the songs that Gus Edwards wrote were written around the turn of the century, so they were pretty old when this movie was coming out in 1939. Some more contemporary songs were written for the film as well by Johnny Burke and Jimmy Van Heusen like: “Go Fly A Kite”, “A Man and His Dream”, “An Apple for The Teacher”, and my favorite song of the film “Still the Bluebird Sing” which is pretty forgotten today. Bing recorded these new songs for Decca, and his biggest hit was “An Apple for The Teacher” which he recorded as a duet with Connee Boswell. 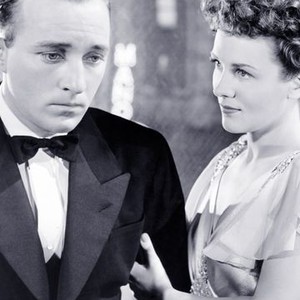 The rest of the cast was great in The Star Maker. Bing’s leading lady as mentioned earlier was Louise Campbell. Campbell did not have much to do in the movie but frown when Bing made bad decisions. Louise never became a big star and only made movies for a decade between 1937 and 1947 before retiring from movies. Character actor and comic crabby Ned Sparks is a great comic foil in the movie, and he appeared with Bing earlier at MGM in 1933’s Going Hollywood. Some other great character actors appear in the film like Laura Hope Crews, Thurston Hall, Billy Gilbert, and Clara Blankdick – who would be appearing that year as Aunt Em in MGM’s The Wizard Of Oz. The Star Maker also tried to make a star out of newcomer Linda Ware. Billed third, Paramount was hopeful that Linda be their answer to Universal’s Deanna Durbin. Linda Ware was likeable in the movie, but she was involved in a custody case between her parents which would ruin any chances she had for stardom. She made a total of two movies, and then faded into obscurity.

Sure, The Star Maker bore little resemblance to the life of Gus Edwards, but film biographies of the 1930s and 1940s were not made to accurately portray their subject, they were made to entertain. This film definitely is entertaining. From the first moment of the film when Bing is singing “Jimmy Valentine” to the orphans to the end of the film when Bing is singing “Still the Bluebird Sing” on radio with his kid stars, the 94-minute movie is extremely entertaining. In the beginning of the film, I was tired of Bing being the lazy non-working husband, but Bing always worked well with children, and in this movie he surrounds himself with dozens of them. This movie is not on video or DVD, so it is hard to come by other than a bootleg copy. However, the full fill is available for free on You Tube as of this writing. Do yourself a favor and check out this whimsical and fun musical that Bing ended the decade of the 1930s with! I’m glad I had the opportunity to watch The Star Maker again!
MY RATING: 10 out of 10 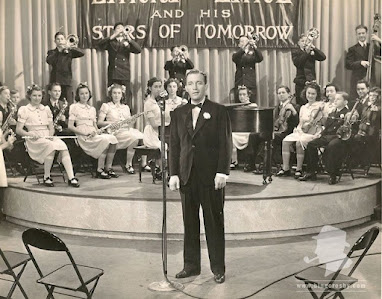 Posted by David Lobosco at 8:16 AM