BING AND HIS LOVE OF GOLF 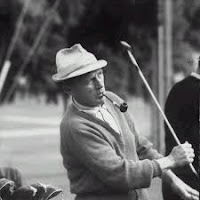 Bing Crosby is a member of the prestigous World Golf Hall of Fame. Aside from Bobby Jones and Arnold Palmer, Crosby may be the person most responsible for popularizing the game of golf. Since 1937 the ‘Crosby Clambake’ as it was popularly knownow the AT&T Pebble Beach National Pro-Amas been a leading event in the world of professional golf.

Crosby first took up the game at 12 as a caddy, dropped it, and started again in 1930 with some fellow cast members in Hollywood during the filming of The King of Jazz. Although he made his name as a singer, vaudeville performer, and silver screen luminary, he would probably prefer to be remembered as a two handicap who competed in both the British and U.S. Amateur championships, a five-time club champion at Lakeside Golf Club in Hollywood, and as one of only a few players to have made a hole-in-one on the 16th at Cypress Point.

He conceived his tournament as a friendly little pro-am for his fellow members at Lakeside Golf Club and any stray touring pros who could use some pocket change. The first Clambake was played at Rancho Santa Fe C.C., in northern San Diego county, where Crosby was a member. He kicked in ,000 of his own money for the purse, which led inaugural champion Sam Snead to ask if he might get his 0 in cash instead of a check. Snead’s suspicions notwithstanding, the tournament was a rollicking success, thanks to the merry membership of Lakeside, an entertainment industry enclave in North Hollywood. That first tournament set the precedent for all that followed as it was as much about partying as it was about golf.

The tournament, revived on the Monterey Peninsula in 1947, has as of 2009 raised million for local charities. 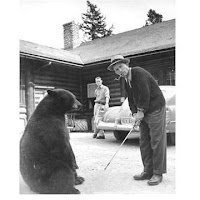