THE EARLY LIFE OF BING

Bing Crosby first appeared in the wide world of entertainment in the mid 1920s. Fans are used to seeing Bing as the carefree crooner on the radio and movies or maybe in later years as the elder statesman of crooning. However, as hard as it is to believe, Bing at one time was a child. Before he became Bing Crosby entertainer - he was Harry Lillis Crosby from Washington State! 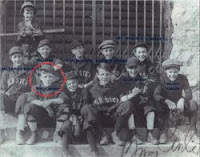 In 1910 Crosby was forever renamed. The six-year-old Harry Lillis Crosby discovered a full page feature in the Sunday edition of Spokesman-Review, The Bingville Bugle. The Bugle, written by humorist Newton Newkirk, was a parody of a hillbilly newsletter complete with gossipy tidbits, minstrel quips, creative spelling and mock ads. A neighbor, 15-year-old Valentine Hobart, shared Crosby's enthusiasm for The Bugle. Noting Crosby's laugh, she took a liking to him and called him Bingo from Bingville. The last vowel was dropped and the name shortened to Bing, which stuck.

In 1917 Crosby took a summer job as property boy at Spokane's "Auditorium" where he witnessed some of the finest acts of the day, including a blackface performer named Al Jolson who spellbound Crosby with his ad-libbing and spoofs of Hawaiian songs that brought down the house. Crosby would later say that, "To me, he was the greatest entertainer who ever lived."

Bing enrolled in Gonzaga College in the fall of 1920 with the intent to become a lawyer. While in Gonzaga he sent away for a set of mail order drums. After much practice he soon became good enough and was invited to join a local band called the "Musicaladers" which was mostly made up of local high school kids. He made so much money doing this he decided to drop out of school during his final year, to pursue a career in show business...and as they say the rest is history!

SOURCE
Posted by David Lobosco at 11:10 AM