Here is a short but interesting article on how Bing inspired Frank Sinatra...

Frank Sinatra said he heard “symphonies from the universe” in his head as a kid and thought about singing for a living as young as 11-years-old.

But it was a Bing Crosby concert in the summer of 1935 at Loew’s Journal Square in downtown New Jersey that changed Frank’s life.

‘He was the first troubadour that any of us had heard. After seeing him that night, I knew I had to be a singer,” he said. More than just a crooner, Bing told a story with each song. His style was relaxed and casual. He made the audience feel like he was singing directly to each one of them. Frank knew he could do that.

There were many musical influences on his voice. He spoke particularly about jazz singer Billy Holiday.

“What she did was take a song and make it hers,” he said. “She lived inside the song. It didn’t matter who wrote the words or the music.” All the heartache, disappointment and pain was right there in her voice.

Frank did the same.

On Dec. 3 & 4, Julien’s Auctions in Beverly Hills, Calif., featured a selection of Sinatra memorabilia in its Icons & Idols auction.

Frank’s infamous wide-brim Fedora sold in the auction for $25,000. 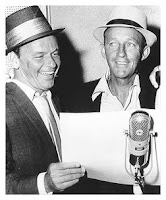 SOURCE
Posted by David Lobosco at 9:43 AM