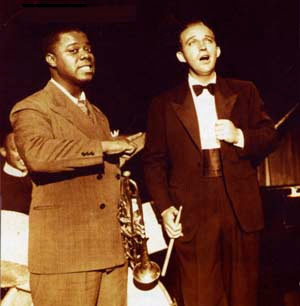 Here is an interesting story from author Gary Giddins on how Bing met Louis Armstrong. It was a match made in musical heaven...

To hip musicians in Chicago, scat had been the rage for months. Bing and some of the other adventurous musicians in Whiteman's band heard it that very week from the master himself, Louis Armstrong. If mobster Al Capone ruled the city, Armstrong ruled its music. Whatever he played was instantly picked up by other musicians. The previous spring Okeh issued his Hot Five recording of "Heebie Jeebies," and it caused a sensation, selling some 40,000 copies thanks to his inspired vocal chorus - a torrent of bristling grunts and groans in no known language.

Pianist Earl Hines later claimed he knew musicians who tried to catch cold so they could growl like Louis; and Mezz Mezzrow, the marijuana-pushing clarinetist, recalled, "You would hear cats greeting each other with Louis's riffs when they met around town…scatting in each other's face." Before Louis, scat singing could be heard on records by Cliff Edwards (Ukelele Ike) and Red McKenzie (Mound City Blue Blowers); Bing and Al had admired and imitated them in Spokane. But the ad libs on those records were often disguised by kazoo or comb. They had little of Armstrong's rhythmic thrust and none of his melodic ingenuity.

At the time Whiteman pulled into town, Louis was fronting the Sunset Café band, with Hines as his musical director. The place was run by Joe Glaser, a Capone acolyte who several years later would become Armstrong's manager, building the powerful Associated Booking Agency in the process. In Chicago he billed his star in lights as "The World's Greatest Trumpet Player." The Sunset was located on the main stem of black Chicago but served an integrated audience. Because its band played a good two hours after most others retired, the club became a second home to many of the best white musicians in town, among them Bix Beiderbecke, Hoagy Carmichael, Tommy Dorsey, and Frank Trumbauer. 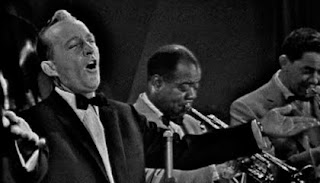 Whiteman introduced Bing and Al (Rinker) to the Sunset and other hot spots in Chicago. One can only imagine Bing's initial response to Louis's irrepressible genius, especially if Mildred Bailey had primed him for an experience bordering on the Second Coming. All his life Bing surrounded himself with people who made him laugh. In Armstrong, music and humor were inseparable. Bing was bowled over one evening when Louis revived a routine he had developed in New York in 1924, putting on a frock coat and dark glasses and preaching as the Reverend Satchelmouth. The Gonzagan found Armstrong's irreverence almost as revelatory as his music. He had a front-row pew and knew exactly what he was hearing. When asked in 1950 who had influenced him most, Bing replied, "I'm proud to acknowledge my debt to the Reverend Satchelmouth. He is the beginning and the end of music in America. And long may he reign." 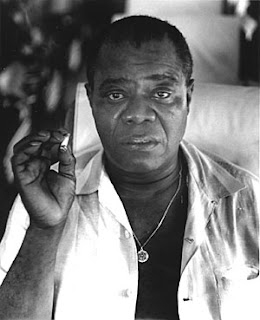 SOURCE
Posted by David Lobosco at 8:56 AM