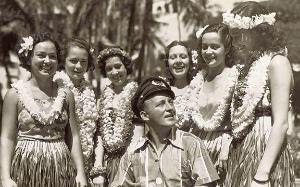 A Hollywood Haven
By Burl Burlingame

Seventy-five years ago, after several brief flirtations, Hollywood arrived in Hawaii in a big way.

Film crews for "Waikiki Wedding" showed up to film exteriors for the Bing Crosby musical. When it was released in early 1937, it became one of the most popular movies of the year, partly because of the swell hapa haole songs "In a Little Hula Heaven," "Blue Hawaii," "Okolehao," "Nani Ona Pua" and "Sweet Leilani," which won the Oscar for best song for bandleader Harry Owens, as well as becoming Crosby's first gold record.

"Waikiki Wedding" was also the first major Hollywood movie to feature modern Hawaii, highlighting Waikiki's touristy ambience, particularly the art deco charms of Matson's Royal Hawaiian Hotel. As a marketing tool, it couldn't be beat. As the age of the flying clippers and Matson's "white ships" brand of ocean liners deposited ever-increasing flocks of tourists, many were Hollywood stars.

It all seems like yesterday to Matson Navigation Co. archivist Lynn Krantz. As she sorts the mountains of material at the shipping company's archive, pictures literally fall out, images of a time past that holds a special glow for Krantz. 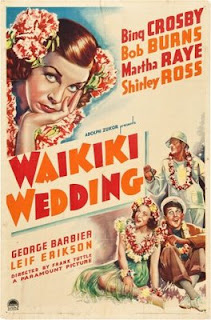 "I just love that time period, the '20s through the '40s. I'm so connected to it while I'm immersed in the research. And the stars stayed at the Royal Hawaiian during Hollywood's golden age. I just felt we had to get them back to the Royal somehow. It became a passion!"

This passion paid off. On Thursday the Royal Hawaiian Hotel opens "Hollywood's Golden Age in Waikiki," a free exhibit curated by Krantz that showcases Matson's collection of rarely seen photographs of Hollywood celebrities. Similar to last year's Amelia Earhart exhibit, it's open to the public in the hotel's Coronet Lounge and runs through the end of the year.

We're talking Shirley Temple, Bette Davis, Bing Crosby, Spencer Tracy, Edgar Bergen, Harry Owens and Mickey Rooney, among others. Most of them seem to have met Duke Kahanamoku as well.

Matson constructed the Royal Hawaiian in 1927 to pamper guests both afloat and ashore. Even though Matson later sold the hotel, the company maintains a cultural relationship.

"I had to narrow it down," said Krantz. "And also, a ton of research, because there wasn't much information attached to the pictures. This picture of Edgar Bergen, for example … When was it taken? I checked into Bergen's records and discovered he did a press tour to promote his movie with W.C. Fields, ‘You Can't Cheat an Honest Man,' which made it 1939.

"We keep finding new things. I love presenting this history. Such cool photos. I mean, there's Bette Davis with leis on in her Lurline stateroom, and she's got freckles! You never see her without makeup. The Charlie Chan movie ‘The Black Camel' showed the Royal Hawaiian in 1931. 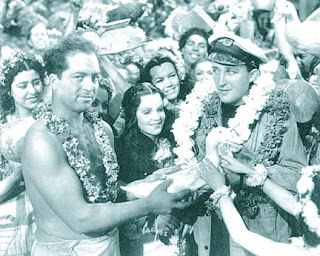 Krantz is getting breathless over the cool glamour of it all, so we'd better let her go...