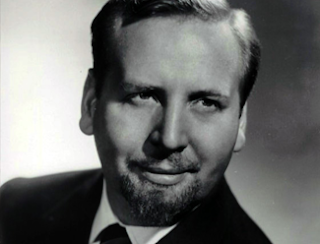 Here is the New York Times obituary for legendary conductor Skitch Henderson from November 3, 2005. He died ten years ago...

Skitch Henderson, the conductor, pianist and radio and television entertainer who provided music and repartee for the "Tonight" show in the 1950's and 60's and who founded and led the New York Pops, died on Tuesday at his home in New Milford, Conn. He was 87.

His death was announced by James M. Johnson, executive director of the Pops.

With his neatly trimmed Vandyke beard and friendly disposition, Mr. Henderson was a familiar personality to millions of Americans over a long career. He had shows of his own on radio and television, and made many guest appearances in the 1950's and 1960's on "To Tell the Truth" and other game shows.

He was also a mainstay of the "Tonight" show, conducting the studio band and swapping stories with Steve Allen beginning in 1954 and later with Johnny Carson. He devised the "Stump the Band" routine, in which members of the studio audience would suggest obscure song titles and challenge the band musicians to play the tunes.

Mr. Henderson liked to stretch his players when he could, using arrangements by distinguished writers like Neal Hefti and Ernie Wilkins. Among the sidemen in the Henderson band were the trumpeter Clark Terry and Doc Severinsen, who took over as leader in 1967. 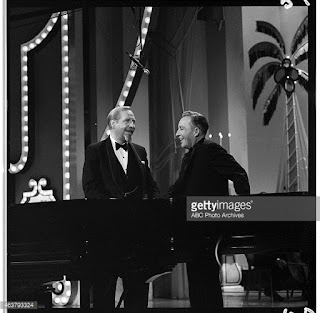 Though he became as much a performer as a conductor-pianist, Mr. Henderson always maintained his musical presence. He once described himself as "a middlebrow musician who does quality show music," and critics over the years seemed to agree with that assessment.

Under Mr. Henderson's leadership, the New York Pops were born unofficially in the 1950's, with 70 members of the New York Philharmonic. It faded, but Mr. Henderson started it again, formalized its existence in 1983 and conducted it for many years, drawing musicians from the city's freelance pool.

Mr. Henderson was regarded as one of the best-traveled musicians on the scene. In addition to turns on the podium of the New York Philharmonic, he made appearances as a guest conductor of orchestras in San Diego, Minneapolis, Salt Lake City, Tulsa and Stamford, Conn., and of quality pops orchestras in Virginia, Florida and Kentucky. Abroad, he conducted the Royal Philharmonic and the London Symphony. 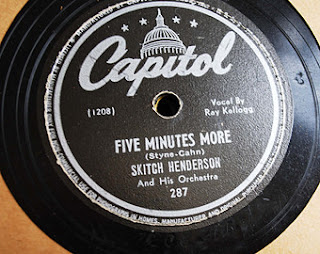 He received a 1963 Grammy Award for an album of selections from "Porgy and Bess," with the RCA Orchestra and Leontyne Price as the main soloist. "What's great about Skitch," Marvin Hamlisch, who performed with him often, once said, "is that he can move between any type of music. Now he does a lot of pop music, but he knows the repertoire of the classics as well as anyone. He's a consummate musician."

Lyle Russell Cedric Henderson was born on Jan. 27, 1918, in Birmingham, England. In interviews over the years he said that he took piano lessons when he was 6 from his mother, a church organist, and that he came to the United States when he was 14. By the time he turned 15, he said, he had decided to try to make his mark in music.

Mr. Henderson told reporters that when he was very young, "I ran away and played with a rinky-dink band." He was somewhere in the Midwest in the 1930's, playing a hotel, when he encountered Judy Garland. He stepped in when her regular accompanist became ill and later was a rehearsal accompanist for both Garland and Mickey Rooney. 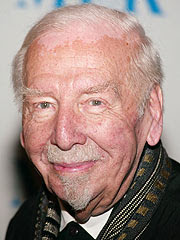 In 1938 he played piano for "The Bob Hope Pepsodent Show" on radio. Two years later, Mr. Henderson enlisted in the Royal Canadian Air Force. When the United States entered the war in 1941, he joined the Army Air Corps and became a fighter pilot.

After his discharge in 1945, he organized his own dance band and toured the United States. He worked with Bing Crosby on the radio and was also music director of Frank Sinatra's "Light-Up Time" radio show.

He was often asked where he got the name Skitch. He said it was given to him by Bing Crosby, who told him the public would never remember proper names like Harry Lillis Crosby but couldn't forget him once he became Bing. Crosby began to call him the Sketch Kid, because as a rehearsal pianist he made piano sketches for the orchestrator. From that came Skitch.

In 1998, he summarized his career for The Salt Lake Tribune. "I've never had goals," he said. "I have worked and been lucky enough. If one trolley broke down, I was able to get on another that was running. Goals are dreams but they are seldom realistic." 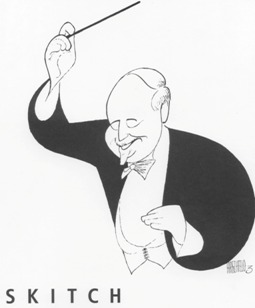 SOURCE
Posted by David Lobosco at 6:24 AM