BING AND THE YOUTH CRUSADE 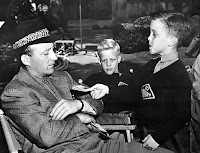 Bing Crosby and the "Youth Crusade"
by the Associated Press

We have already seen how Hollywood actors, Ronald Reagan, Clark Gable and Kirk Douglas contributed their time and effort for the Crusade for Freedom and Radio Free Europe.

Famed singer, entertainer, television, radio and movie star Bing Crosby was seen in movie theaters during the 1951 campaign, appealing in a short advertising film for support of the Crusade for Freedom:

"I want to tell you something I found out over in Europe: we’ve got plenty of good friends behind the Iron Curtain, probably fifty or sixty million of them.

Naturally they’re not Russians, they’re not Communists. They’re freedom-loving peoples in the captive countries, who refuse to believe the big Red lies the Commies tell them. And you know why they don’t believe those lies?

It is because we, yes, you and I, and millions of other private US citizens have found a way to pierce the Iron Curtain with the truth. And that way is Radio Free Europe, the most powerful weapon in the Crusade for Freedom."

Bing Crosby and his four sons, Gary, Dennis, Michael and Lindsay, were featured in a nation-wide half-hour radio program on NBC on Friday September 28, 1951, entitled “Youth Crusade with the Crosbys.”

The Crosby family show was a combination entertainment and solicitation program. Bing Crosby asked his youthful listeners, “Are you willing to give up three pieces of bubble gum?” He explained that “three cents will buy one brick for a new Radio Free Europe station to carry the truth behind the Iron Curtain.” He urged them to sign the Freedom Scrolls, which had been sent to schools throughout the country, and to contribute a few cents to the Crusade for Freedom. A young Czech boy living in Munich, Germany, was interviewed for broadcasting in the Crosby show.

The Crosby "Youth Crusade" show was repeated over the NBC radio network on Saturday, September 29, 1951.

Wednesday, October 3, 1951, was designated as “Youth Crusade Day” in the United States, and the Bing Crosby radio program was rebroadcast for “in-school” listening by students in various schools around the country. For example, in Pennsylvania the program was broadcast to Warren County schools at nine a.m. Wednesday, October 3, which had been officially designated as „Youth Crusade Day“ in a notification sent by County Superintendent H. L. Blair, to all principals. Both high and grade schools heard the radio show as part of the regular in-school listening program in Warren, Youngsville, Tidioute, Sheffield, Sugar Grove and in rural schools, wherever possible.

The Warren County Crusade campaign ran from September 24, 1951 to October 30, 1951, with a goal of $735 in contributions and 5,582 signatures on the Freedom Scrolls--the nation-wide goal was $3,500,000 and 25 million signatures. Warren County chairman David Potter hoped that students would sign "several thousand" Freedom Scrolls. Potter said that this was "A campaign for the future, and no one is more interested in the future than the children of the present. 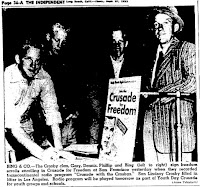 SOURCE
Posted by David Lobosco at 8:26 AM