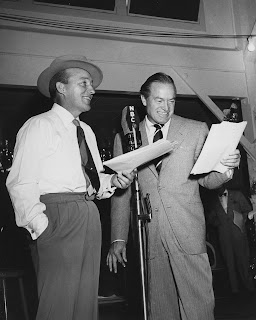 Today in Bing Crosby history, the world lost Bing's buddy in seven Road films...Bob Hope. Hope died of natural causes on this day in 2003. He was 100 years old.

Many veterans from World War II all the way up through the Gulf War share a common bond that goes beyond the battlefield: seeing USO performances by legendary entertainer Bob Hope. Hope, who hosted or performed in nearly 200 USO shows between 1941 and 1991, died today (July 27th) in 2003 at the ripe old age of 100.

Born Leslie Townes Hope on May 29, 1903, in Eltham, London, England, he immigrated to the United States in 1908 with his parents and siblings, settling in Ohio. Hope became a U.S. citizen in 1920, and somewhere along the line his first name changed from Leslie to Lester. He underwent one final name change in 1929, adopting “Bob” as his first name because (according to one account) it had a friendly feel to it.

Hope’s prolific career as an entertainer began in vaudeville and grew to encompass theatre, radio, television, and film. His appearances in the “Road” movies (such as “Road to Morocco” and “Road to Rio”) with Bing Crosby and Dorothy Lamour made Hope a household name.

The trio made seven of these movies between 1940 and 1962, with an eighth, “Road to the Fountain of Youth,” planned for 1977. Unfortunately, Crosby died before the eighth movie could be filmed.

Offscreen, Hope mounted show after show through the USO, traveling throughout the world to bring much-needed entertainment and encouragement to the men and women of the military during both wartime and peacetime. In 1997, Congress and President Clinton honored Hope for his 50 years of service through the USO by naming him an honorary veteran. 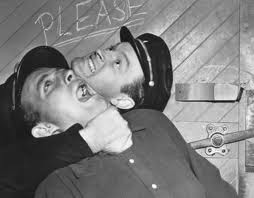 Hope was the first person to be given this distinction and said it was the greatest honor he had ever received. This was quite a statement, as he received numerous awards and honors for his accomplishments within the entertainment field as well as for his philanthropy.

Hope was also a formidable golfer, often using a golf club as a prop during his stand-up comedy performances. He putted with a two-year-old Tiger Woods on The Mike Douglas Show in 1978 and played in a foursome with Presidents Gerald Ford, George H.W. Bush and Bill Clinton during the opening round of the 1995 Bob Hope Classic, the professional golf tournament that bears his name.

Hope continued to perform into his 80s and 90s, even making a guest appearance as himself on an episode of “The Simpsons” in 1992. The episode garnered 11.1 million viewers, proving that even towards the end of his career, audiences couldn’t get enough Hope... 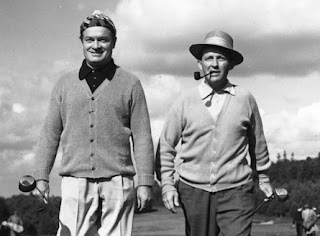 SOURCE
Posted by David Lobosco at 5:52 AM