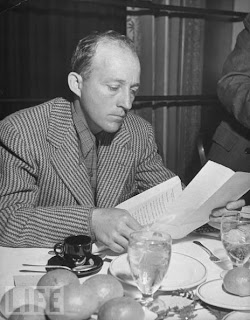 "That was a great game of golf, fellas," he said, striding off the 18th green at a Madrid golf course, moments before suffering a massive heart attack.

Yet some of his last written words are in the possession of Herb Rotchford Jr., the principal of Shadle Park High School.

Those words are contained in a handwritten letter Bing sent to Herb Rotchford Sr., one of the Spokane-raised star's oldest and dearest childhood friends. It arrived at Rotchford's Hayden Lake, Idaho, home three days after Bing died on Oct. 14, 1977.

Bing had written the letter from London on Oct. 5, 1977. In it he chats about his shows at the London Palladium, his deteriorating golf game and his back problems, caused by a tumble into a Pasadena orchestra pit earlier that year.

Here's the letter, in its entirety:
"Dear Herb,
"No. I didn't have to have the operation. The medics are very reluctant to go into the back surgically, and they didn't deem it necessary. Not unless a sudden and drastic change occurs. At the moment I seem to be progressing well, if somewhat slowly, doing some concerts and TV here in Europe Chud Wendle (a mutual friend from Spokane) was at the show last nite. Play golf, but badly, of course. Very limited back-swing. But I love these golf courses and lots of good guys to play with. Be home in late October.
"Love to all,
"Bing"

It's a friendly, informal letter made poignant by its timing. This letter is just a small part of the trove of Bing-related items in several photo albums and scrapbooks passed along to Herb Rotchford Jr. by his father, who died in 1981. It's a mother lode of Crosby memorabilia and artifacts or what aficionados worldwide call "Crosbyana."

The Crosby theme is evident throughout the Rotchford albums for one simple reason: Bing and the elder Rotchford remained close all of their lives. One of the earliest photos shows Rotchford and Crosby on the same youth basketball team in 1920, when they were teens. The friendship endured even after Rotchford Sr. became a Spokane dentist and Bing went on to become the biggest star in the world.

Sometimes, Rotchford Sr. would go down to Hollywood to visit him. The Rotchford photo albums include snapshots showing Bing and sometimes Rotchford Sr. posing with such luminaries as Dean Martin, Jerry Lewis, Joe DiMaggio, Ted Williams and William Frawley (Fred Mertz of "I Love Lucy" fame). More often, it was Bing who came to visit Herb Sr. in the Inland Northwest. The Rotchfords had a house on Hayden Lake, and Bing would sometimes stay there while on visits to his hometown. He came to love Hayden Lake for its golfing and fishing opportunities.

"He liked it so much, he had my father buy him a house on the lake and a Chris-Craft boat, sight unseen," Rotchford Jr. said.

From that point on, Crosby and his growing family would spend every August at their place on Hayden Lake. Bing, in his autobiography, "Call Me Lucky," called it an "oasis of enjoyment in a hurly-burly world." The Rotchfords lived only a few houses away. The family photo album is jammed with snapshots of the two men playing golf together, clowning around together and going on joint boat outings with their families. Bing was, in fact, Herb Jr.'s godfather. The scrapbook contains another Bing letter, this one written to Herb Jr. when he was in college at the University of Washington in 1969.

In this one, Bing speaks his mind in a surprisingly candid fashion about one of the most divisive issues of the day, the Vietnam War:

"It seems to me the government is making noises like they want to get out of Vietnam. I hope they're serious about this, and I know you hope so, too. It would be a great relief, I'm confident. It's a silly war, and it doesn't seem to be getting anywhere. Just costing a lot of lives, and a lot of money. Nobody can give you a valid reason why."

He ends the letter with a typical Bing-style ribbing of Herb Jr.'s dad:

"I hear your folks have gone back to Spokane. I suppose this pleases Herb, as he has a number of good golfing pals around there, and it must have been difficult for him to find these kinds of pigeons around Seattle."

The letter is signed, "Always yours, Godfather Bing."

Rotchford Jr. also has a set of golf clubs made especially for Crosby, inscribed with his name. At some point, Bing gave them to Rotchford Sr. Those clubs are particularly apt pieces of Crosbyana, since Bing was so closely associated with golf. Yet for Rotchford Jr., they represent just another tangible reminder of "Godfather Bing." 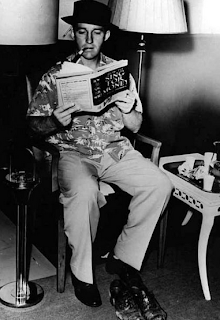 SOURCE
Posted by David Lobosco at 4:25 AM