THE BING CROSBY COLLECTION AT GONZAGA 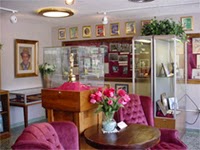 Bing Crosby began to donate items to Gonzaga University in preparation for the opening of the Crosby Library in 1957. Bing donated gold and platinum records, trophies, placques, and photographs to addorn the room. In addition to the generous donations of materials by Bing prior to his death, Crosby fans and family began to recognize the Crosby Library as the home of all things Crosby. In June 1993, the University received the entire collection from the Bing Crosby Historical Society in Tacoma, Washington. Additionally, several collectors have given major donations of Crosby recordings.

Today, the Crosbyana Room in the Crosby Student Center serves as a museum for Crosby fans. Each year over 2500 visitors sign the guest book in the Crosbyana Room. These visitors come from all fifty states and at least 20 foreign countries. Crosby fans recognize Spokane and Gonzaga as being his hometown and alma mater and make the trek to see the sites. Visitors can see approximately 200 items, including the duplicate Oscar he won in 1944 for "Going My Way". There are twenty-two gold and two platinum records from such titles as "White Christmas," "Silent Night", and “Swinging on a Star.” Also displayed are movie stills and photographs, record albums, books, and sheet music. There are many trophies and awards he received over the years from various organizations. There are also items from the Crosby Research Foundation, such as the “Trip Trap,” a mousetrap that the foundation invented. There is also a health device that Crosby endorsed called "Stretch to Your Health with the Stars.”

What you see today in the Crosbyana Room is just a portion of the total amount of trophies and citations that Bing won over the years. Space does not permit us to show all of his treasures. What is not on display is housed in the Special Collections vault in the Foley Center Library. This vault also houses the University’s Rare Book Collection, the University Archives, the Jesuit Oregon Province Archives, and other manuscript collections.

The Crosby Collection includes: approximately 1400 records and albums, 800 audio cassettes, 2000 discs of radio shows, 300 pieces of sheet music, and an extensive magazine and clipping file about Bing's life and career. There are numerous scrapbooks created by his adoring fans, Crosby's correspondence with Gonzaga, and hundreds of photographs depicting his high school, college, and career days. The collection also contains books by and about Bing and his contemporaries, and publications by various Crosby fan clubs from throughout the world.

A major donation to Gonzaga University from Bing Crosby in 1957 was the massive collection of his radio shows. Nearing 2000 discs, the collection contains “The Bing Crosby Show,” “Kraft Music Hall,” “Minute Maid Fresh Squeezed Orange Juice,” “Philco Radio Time,” and other titles. In all, this is a major holding of Crosby’s radio work from 1943 to 1954. What makes this collection even more impressive is the fact that these 16-inch discs are in excellent playing condition and they are fairly complete.

The Gonzaga Collection has a few of his personal effects. Some of these items such as his pipes can be viewed at the Crosby Alumni House. Located at 508 E. Sharp this building, which was Crosby's boyhood home, is open weekdays to the public free of charge... 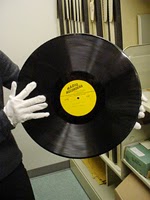