GUEST REVIEWER: JUST FOR YOU 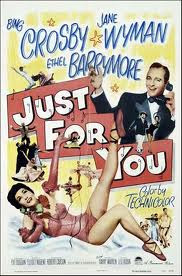 Our regular guest reviewer Bruce Kogan is at it again reviewing the technicolor Bing flick - Just For You. The movie is one of my personal favorites, and in a way the movie mirror's Bing's own career in show business...


This is the second of two films Bing Crosby partnered with Jane Wyman after their stunning success in Here Comes The Groom. This time Paramount gave them color and Ethel Barrymore and the results are a treat.

Bing's a successful stage actor who's about to marry his leading lady, Jane Wyman, when he discovers he's got a communication problem with his two kids. Daughter Natalie Wood wants to get into an exclusive girl's school and son Robert Arthur misreads some signals and starts crushing big time on Wyman.

Ethel Barrymore is headmistress of the school and she helps Crosby solve his daughter's problems. His son, after writing a love ballad for Wyman, is rebuffed and joins the Air Force. All is righted in the end and in the usual Crosby charming way. 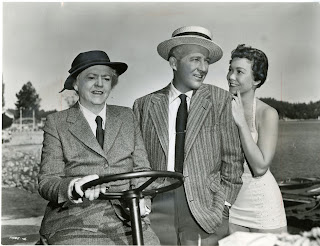 Paramount gave Bing some good production numbers out of the Harry Warren-Leo Robin score. Bing sings I'll Si Si You In Bahia as a number from the show he's rehearsing and later sings The Live Oak Tree with the girls from the St. Hilary's School at their picnic. He also does a nice vaudeville patter number with character actor Ben Lessy called On the 10-10 from Ten-Ten-Tennessee.

The big hit is a duet with Crosby and Wyman called Zing a Little Zong which is a complete ripoff of the number he and Wyman did for Frank Capra in Here Comes The Groom. Well if they can't ripoff from themselves who can Bing and Jane ripoff from? The song was nominated for an Oscar, but lost to Do Not Forsake Me from High Noon.

Just For You is the title song and it's the one that Arthur writes for Wyman. A couple of numbers that Crosby recorded failed to make the cut, Spring Fever and A Flight of Fancy. The latter is heard as an instrumental background. It's one of my favorite Crosby songs and I wish it had been done in the film... 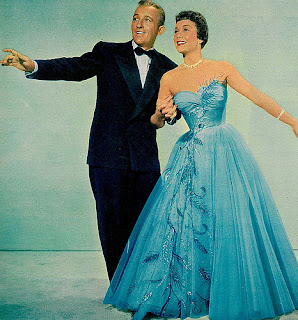