Here is a little paragraph I found about Bing and his visits to the Saratoga Springs race track: 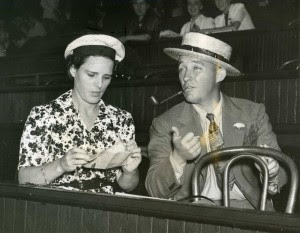 I remember when I was a kid, in 1939, I used to sell programs on the side of the United States Hotel. Right at the side door. I sold programs to Bing Crosby. Most of the time, he would have a fella come down and pick up the program. But there were a couple of occasions where he would pass by and get them himself. You might sell them for 15 cents, but he would give you a buck for three of them.

Bing Crosby takes his seat in a Saratoga box seat in August, 1937. Sittting with the famous crooner is Mrs. Charles Howard. Her husband was the owner of the legendary Seabiscuit.

There was this place called the Adelphi Grill, right next to the Rip Van Dam Hotel. A lot of celebrities used to go in there.

They had these great, big pastrami sandwiches and a big helping of potato salad for 75 cents. It was a nice spot.

Celeste Holm used to play at the Little Theater (which is located near the Hall of Springs by the Gideon Putnam). She came in one night and I told her she was my favorite actress. 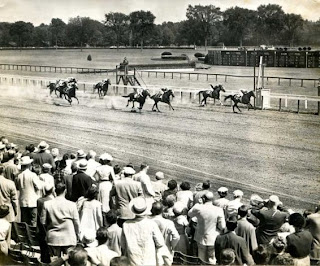 SOURCE
Posted by David Lobosco at 8:01 AM